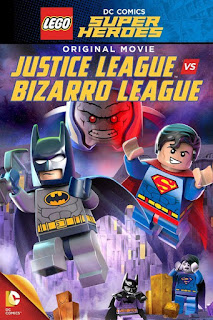 Things made to be all-ages or with kids in mind do not have to be childish or bad. Seriously, things that are made so that they can appeal to youth can still be fun and enjoyable for adults too. The thing is, so often we find pieces of entertainment that take the idea of, "For children," and use that as a synonym for, "Dumb humor, no plot, and otherwise lacking in enjoyment." For an example of a movie that is suitable for the young'uns but which is also great for grown-ups look to, "The Lego Movie." With that in mind other Lego-related animated films should be good too, right?

"Justice League VS Bizarro League," is incredibly bad. The Lego games with DC characters tend to be fun, have a good plot, and feature computer graphics (of course). This movie sadly only has computer graphics and sorely lacks anything else. 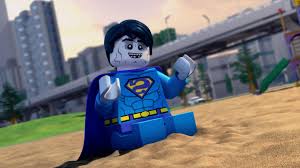 The story, as it were, is how Bizarro is causing a ruckus around Metropolis so Superman has him go to his own planet to chill-out and wreck stuff. Then a year later Bizarro comes back, steals the faulty duplicator ray that created him, and makes Bizarro-copies of some of the Justice League. Then he retreats to his planet where it turns out Darkseid is stealing its rocks for the purpose of destroying Earth or something...around the the last 18 minutes I kind of tuned out and found myself staring into space thinking about random stuff as opposed to giving this miserable excuse for a movie much of any attention. Oh, and as the flick is only 45 minutes (or so) clearly things go downhill fast.

The jokes tend to be pretty lame, with them being either Wonder Woman repeatedly tripping for no apparent reason, Cyborg stating things that sound vaguely racist for the writers to have him say as he's the only black character on the team (making it seem like it was what a bunch of white people thought a black man would talk like), or Batman having an inexplicable huge hatred for Superman. 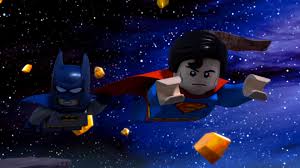 That last one was really odd too, with Batman of course in the comics having trust issues with Superman, but here he basically is plotting how to utterly destroy the Man of Steel due to thinking his being an alien makes him an impossible-to-ever-trust monster.

The one positive thing I can say about the movie is that the animation is pretty solid. It kind of looks just like an unplayable Lego Justice League game--which is good as if this were a game it would be a pretty dreary waste of time. The fact that watching this at least didn't make my eyes bleed from awful animation is a plus.

Overall this was a quite bad movie, and one that no adult or child should be subjected to. Avoid it, avoid it like the plague.
1 out of 5 stars.
Posted by David Charles Bitterbaum at 9:46 PM