What Are Subscription Boxes?
For those of you who don't know what a subscription box is, it is basically just what it sounds like! A box that comes monthly (sometimes more or less often) which you subscribe to. There are many kinds of subscription boxes, from those that have beauty products, to healthy foods, wine, and the ones that particularly interest me, the "Geek," boxes. Full of items that appeal to someone nerdy such as myself, I thought I would look into subscription boxes not realizing so many existed! After spending a lot of time exploring my options--the website, "My Subscription Addiction," was a big help--I picked some to try out and will post reviews of them now-and-then when they arrive in the mail. The first one I'm going to review in my new debut segment is the November 2015 box from Geek Fuel. It is a good box to start with as I was quite impressed with what came! Geek Fuel is a slightly newer subscription box compared to other ones on the market, but I've heard a lot of good things about them. Unlike some subscription boxes they choose not to have a theme with their monthly boxes, instead just having an assortment of cool stuff. I know some people dislike when a box lacks a theme but my thinking is it can actually help because being stuck with a certain topic can constrain options--again, my opinion. That said, there was definitely some stuff that tied together this month, with video-games playing a pretty big role. Let's review... 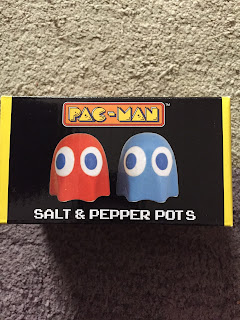 Pac-Man Salt and Pepper Shakers
I wanted to mention this one first as it was my absolute favorite item. As a big video-gamer who remembers when arcades were more common, I have fond memories of wasting away the hours (and quarters) playing stuff like Galaga and Pac-Man. Also, the red ghost AKA Blinky is my favorite of them all, so that just helps make this even better! 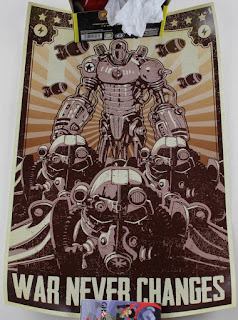 Fallout-themed "War Never Changes Poster"
First off, that isn't a picture I snapped, it is found at this link courtesy of the earlier-mentioned, "My Subscription Addiction," as I was having trouble getting it to stay flat/I was too lazy to get it to stay put. I really like this poster because it has a snazzy look reminiscent of the old propaganda ones (which is intentional) and is on a nice heavy paper-stock. This isn't one of those super-thin papers that feel like they could rip easily if you barely flicked the poster. 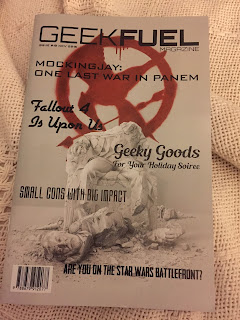 Geek Fuel Magazine
I realize I didn't mention that each box comes with a little magazine. There isn't anything too wild in it, just a mixture of discussion about stuff that's contained in the box (or relates to it), what could be in future boxes, etc. Still, its a nice touch and gives off the appearance that your box was assembled by people who really do care about geek-stuff.

Fallout 4 Security Key Card
This actually is an entry-code of sorts for a, "Fallout 4," promotion being done by Geek Fuel. If you have the correct code on the back of the ID you'll win a a Playstation 4 and a bunch of Fallout swag, and even if you don't win you can enter a promotion to get an XBox one. As someone who is open about his preference for the PS4 it did make me giggle a little that an Xbox One is a runner-up item. Oh, and I didn't win but still find the keycard snazzy enough I'll keep it as a cute decoration. Well, if I can find where I put it; this pic is again thanks to MSA. 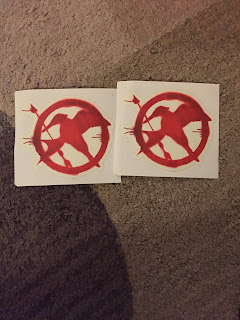 Hunger Games "Mockingjay" stickers.
I've never read a "Hunger Games" book or watched one of the movies so this does nothing for me. Still, I imagine fans of the series would be excited to get these. 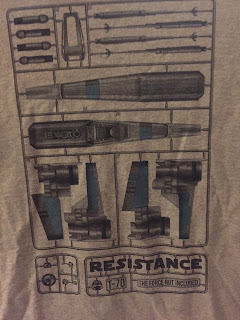 "Assemble the Resistance" T-Shirt
One thing I like about Geek Fuel is that every month the box comes with a shirt. I think that is pretty cool. Now, the unfortunate thing is that this shirt didn't really appeal to me. I can't say why exactly, as I enjoy the movie it is obviously referencing (Star Wars), and the idea of it being a toy ship is cute. I guess the fact they kind of tip-toe around directly naming "Star Wars" and instead are just making the inspiration obvious bugs me. I understand why they had to do so, as with an official Star Wars subscription box now in existence I doubt Disney would license the rights to it too eagerly for their competition. Still, this was probably the item I felt the most let-down by as I was excited to get a wearable item, and then got this shirt. 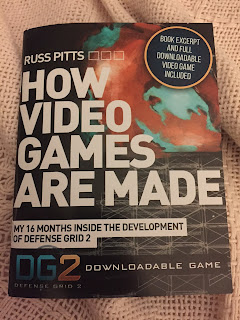 How Games are Made Mini-Book/Defense Grid 2
Okay, this is pretty cool. One of the creators of the game, "Defense Grid 2," wrote a book about their time working on the game's creation and Geek Fuel has provided a mini-book of some of the most interesting parts. The thing that makes this especially neat however is that it comes with a STEAM code for the full version of the game! It is snazzy to think I can read about how a game was made and then play that very same game. It is apparently a tower-defense-styled title, which aren't my absolute favorite, but still generally enjoyable and worth at least trying out. 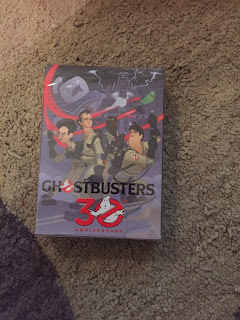 Ghostbusters Playing Cards
I like the Ghostbusters movies but am not a huge fan. I do, however, know someone who is. This therefore will serve as a great, "stocking-stuffer," for them come the holidays. 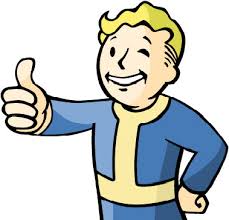 I was pretty impressed with my first-ever Geek Fuel box and my wife (Samii) sat by my side as I opened it up thought it was pretty neat too. She agreed with me that the Pac-Man salt and pepper shakers were awesome and that the shirt was a bit disappointing. Overall I was quite pleased, and Samii agreed it was some good stuff. I'm thinking I am for sure going to continue getting Geek Fuel boxes and look forward to what comes in December! Considering how I enjoyed most things I can easily rate this a great...
4 out of 5 stars.

You can find Geek Fuel at their website here should you wish to learn more or subscribe!

Note: I emailed Geek Fuel as press and was supplied with a discount code for my first box that took off 10 dollars of the usual $23.90 monthly price. However, I received no further compensation for my review.
Posted by David Charles Bitterbaum at 11:18 PM