Frontier #10 Is An Enjoyable Comic 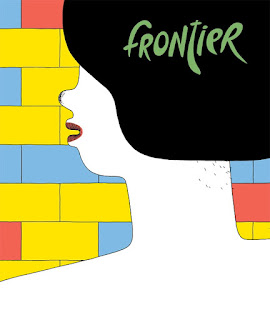 I discussed the comic series "Thickness" before, put out by publisher Youth in Decline. I chatted with the company more than a year ago, and suppose I must have been on a press list somewhere as they just recently mailed me a copy of the 10th and latest issue of "Frontier", which is an anthology series of sorts in that each issue has a new creator featured with a unique story. The newest release has the yarn, "Sensitive Property," by the immensely talented Michael Deforge.

The story itself isn't that remarkable, actually. This is especially surprising considering some the surreal stories Deforge has told in his comics. That said, the artwork is delightfully strange and weird, taking a story that sounds normal at first glance and making it something extra odd. Basically, this comic is about a real estate consultant who has done some extreme and radical things before and now exists to serve as an agent provocateur who infiltrates neighborhoods that get bought out by the real estate company. 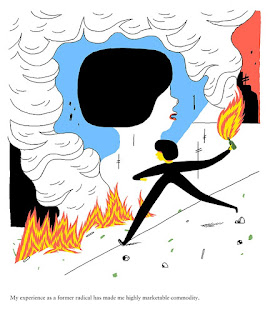 Her job is to then act like she is a part of groups protesting the real estate agency and either make the mellow ones more extreme so the moderate members leave and it falls apart, or take the extreme ones and shift their focus onto all, "The enemies," so that the group eventually grows overwhelmed and falls apart (as you can tell, the point is in the end to dissolve the groups and let the real estate company win).

It's the kind of story you've heard before, just tweaked a bit to be about a real estate company as opposed to a governmental regime, animal rights organization, etc. The thing that makes all this interesting however is that Deforge is unquestionably a genius illustrator and makes even something as simple as a character walking down the street look amazing. Observe: 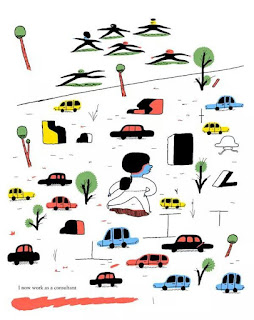 Through Deforge's superb artwork we take a story that would be average and elevate to the level of genius resulting in what is a pretty enjoyable comic. Were this just illustrated in a more simple manner things could be a bit dull, but Deforge is a master of the comic-craft and thanks to his skills something pretty cool is created.

Should you be a fan of Deforge this is a must-read, and if you enjoy wildly good artwork this is, again, worth giving a once-over. Do note that if you dislike Deforge's work this won't do anything to change your mind, but who dislikes his crazy-good stuff? I feel I can easily rate this as being...
4 out of 5 stars.

You can find the 10th issue of "Frontier" on sale at Youth in Decline's website here.

Please Note: A copy of "Frontier" #10 was provided for the purpose of review. At least, I assume it was. It really did just kind of show up in the mail with a note about the comic's subject matter and other works coming out from Youth in Decline in the future.
Posted by David Charles Bitterbaum at 11:00 PM