Wonder Woman Volume 7: War-Torn is Passably Entertaining, But Little Else

Reading the Woman of Wonder 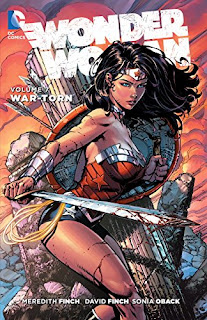 I discussed meeting Meredith Finch at Project: Comic-Con and got a comic signed by her. I figured it made sense to read the volume of story that the comic took place over, so I picked-up Finch's debut arc on Wonder Woman that occured after Azzarello's magnum-opus of a storyline--with Finch's entry being titled, "War-Torn." With perfectly reasonable art provided by her husband, David Finch, Meredith's arc on this (as well as an annual she wrote and someone else illustrated), this is basically a comic that is better than mediocre, but which doesn't have much else going for it.

Good Enough Isn't Good Enough
"Good Enough," is how I would describe this comic--that or the word, "Average." It balances out Wonder Woman's time with the Justice League as well as on her island decently, the plot moves along at a fairly good pace, and certain character's motivations are confusing but other's make sense. Wonder Woman at times comes off as out-of-character in her brutality, but other characters do comment on this and she is the reasonable Diana readers know and love at other points. It is all fine, but were I to have paid for this book (thank you again, local library!) I would be pretty let down, as in this era of comic-prices increasing, something just being average and, "Good Enough," really isn't enough.

We have a flagship character like Wonder Woman and the plot just basically has her bounce around between fighting an evil force, chatting with the League, dealing with traitorous forces on her island, but nothing especially exciting or interesting happens until near the end of this book where the annual sheds some more light on why a certain character acted in the evil manner they did (something which the main issues of the comic don't touch upon and which makes the character just look terrible for hte sake of her being a bad-guy. Also, fan-favorite Donna Troy pops-up but is completely unrecognizable from her character that existed before the, "New 52," and seems to be inserted into the comic more to piss fans off than make them pleased. Truly head-scratching.

I've seen some people discussing absolutely hating this comic, and I have to admit I don't quite understand that. There isn't anything to really hate here (unless you're a scorned Donna Troy fan), just as there isn't much to recommend. It's all just "perfectly" average.
2.5 out of 5 stars.
Posted by David Charles Bitterbaum at 8:50 AM