A Read That Rewards Patience 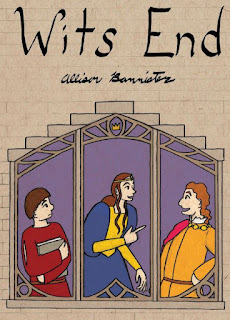 Written and illustrated by Allison Bannister, "Wit's End" is a comic that can be found online at her website here, and which currently just started a Kickstarter campaign to raise funds for a printed edition. I met Ms. Bannister at the recent Project: Comic-Con and when she mentioned her comic, "Wit's End," I expressed interest in obtaining a copy for review, if possible. She was kind enough to supply me with a digital copy of what will be the printed book. So, I have read it, and I enjoyed it a great deal!

"Wit's End" starts out seeming like a simple story set in a vaguely-fantastic realm which features generic characters. You have the overwhelmed new-guy scribe (nicknamed, much to his chargrin, Scribbulous), the recently-given-power Queen named Francis who comes off as being air-headed and thinking she's more important and wise than she is. There is also her best friend, Edward, a man who tells awful jokes, Theodorus, the local psuedo-Knight who obviously has a huge crush on Francis, and Lucy, the seemingly homicidal maid. It all sounds pretty two-dimensional and I'll admit I at first thought it was, but then something interesting happened as I read through these five chapters that make up the book: The characters revealed themselves to be pretty well-developed individuals with their own doubts and insecurities. 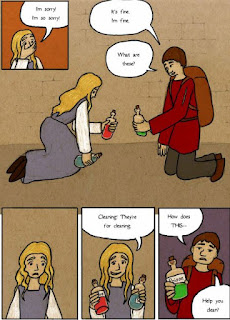 Scribbulous who at first seemed panicky shows himself as someone capable of handling emergencies quite well, Francis shows that she actually is quite aware of the feelings of others around her, but simply acts like she doesn't see it because its too painful to admit she might not actually feel the same way about Theodorus as he does about her. Theodorus appears to be the most well-adjusted of everyone, but clearly has his own severe self-doubts, we learn Lucy doesn't actually want to hurt anyone but is considering some extreme lengths in an effort to finally feel she's made her mother proud and Edward...well, Edward is actually just a pretty happy-go-lucky guy.

This makes things sound really dramatic, and the book actually does have a lot of humor, it just is impressive that something which starts out seeming like a simple bunch of silly adventures featuring some bland characters goes on to reveal itself to be a really deep meditation on the dangerous things people will do (both physically and emotionally) in an effort to feel love--whether that is Franics trying to feel the love for Theodorus she sees he feels for her, Lucy getting the love and attention she wants from a mother who has sent her away, or Edward finding someone who appreciates his awful jokes.
Bannister's artwork has a light and cartoony look, which helps the humor work especially well and facilitates readers in being that much more surprised when things get serious and deep. The colors pop off the page nicely, with the landscape being more darker tones and fantastical effects having a bright white (such as when Theodorus uses his teleportation ability) or a purple glow when a dangerous magic gives someone strange powers later in the story.

"Wit's End," is a comic that--as I stated in the title of this post--is both humorous and heartfelt. This balancing of emotions as well as the enjoyable artwork results in a book that succeeds thanks to its rewarding readers who are patient enough to keep reading past their initial impressions of characters and watch as the comic really delves into exploring what makes these people, "Tick," as it were. I highly enjoyed the comic and would recommend you check out the Kickstarter campaign here.
5 out of 5 stars.
Posted by David Charles Bitterbaum at 2:52 PM