J. Cole's "No Role Modelz" Tries to Balance Precariously on the Line Between Making A Statement and Sexism, Sadly Trips and Falls 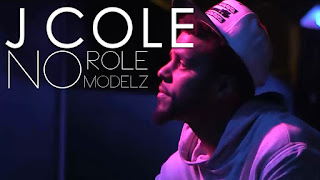 I often bemoan not liking much of today's rap music, but if we're being honest there is a good assortment of artists I find existing somewhere in the spectrum of bearable-to-pretty-good. J. Cole is one artist who I find on his songs seems so close to getting deep and making a statement ,but then kind of fumbles and ends up making something that hints at being amazing, but instead is just moderately good.

"No Role Modelz," can stand as an example of this, with an attention-demanding grouping of horns playing over a delightful beat that joins some stellar verses...mixed with ones that aren't. Some lines are great, others sound like they are trying to make a statement, but instead come off more as being kind of sexist than anything else.
"No Role Modelz," is basically Cole lamenting how there aren't enough good women out there, with it seeming instead like society is saturated with, "Reality hoes," or women who are shallow but whom he still kind of likes because, "The pussy deep." Cole names a variety of famous females he wishes he could have met or dated, and then complains about women who can barely read and only are attracted to him because he can rap.

There is a subject with some real meat on its bones here talking about how many famous females who could serve as an inspiration to younger women today have passed, and we are left with reality-television, "Celebrities," such as your Kim Kardashians, Paris Hiltons and such who impart a terrible message that it makes little sense to put effort into learning or working...but instead of delving into that Cole just basically comes of as kind-of sexist decrying all these women but following-up his insults with a, "But I'll still fuck you, just don't expect me to call the next day."

It is irritating because there are even some absolutely killer verses in this song that provide a glimpse of what sort of greatness we could get, verses such as, "I want a real love, dark skinned Aunt Viv love/That Jada and that Will love," which is a genius allusion to Aunt Vivan on, "The Fresh Prince of Bel Air," a show that of course featured Will Smith who Cole then mentions in the second line of his verse (plus there is that Uncle Phil shout-out at the start to the actor who played him--James Avery--whom passed)It is just an amazing two lines, putting together a fictional show and the real person from it in a clever blend of factual and fictional romance.

Cole also drops verses about how he realizes he calls women, "Bitches," much more, "Heavily," and jokes about being a B-list celebrity before even hinting at some political humor with an old George W. Bush quote where the former President fumbles around trying to say an old phrase about not getting fooled twice.
.
These are some incredible pieces of the song, and they sadly get undermined with the kind of bland sexist raps anyone could do discussing how a woman rubs his feet so well he'll dump his other girlfriend, how he brings, "5 or 6 hoes," back to his house to have sex with and then show the door, and so forth.

I almost prefer a song that lacks any sparks of amazing innovation because when you listen to a jam like this you get kind of depressed seeing these diamonds shimmering in the rough of an otherwise standard, "These hoes ain't loyal but I'll still have sex with them," song. Oh well, regardless of the mixture of superb and subpar lyrics the instrumental aspects are unquestionably great.
Posted by David Charles Bitterbaum at 12:25 PM