More Than Its Lyrics 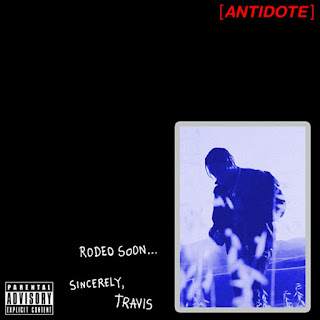 Should you just sit and read the lyrics for, "Antidote," by music artist Travi$ Scott you might simply at first think, "Oh great, yet another song about smoking weed, taking pills, and otherwise doing a lot of drugs." However, this song is a bit more than it at first seems. The music video is right below but I would recommend actually not watching it and instead letting your own imagery float through your head as you absorb the sounds:

First off, just study the structure of the song. Compared to others that follow a usual formula along the lines of verse-chorus-verse-chorus-(sometimes) a bridge-chorus-song ends this one already is a bit bizarre. It opens with the chorus (not too odd, but a little less common), and then proceeds to have a verse and shift back into the chorus. Then the music begins sounding a little more disjointed and ethereal, almost as if the metaphorical (and literal) drugs have kicked in and the and listener is joining Scott on a trip. The song suddenly has a bridge, a verse that is almost more of a bridge, another bridge, and then after seeming like it'll just forever float about in space the beats-per-minute suddenly speed-up a tad and we kick into a fast-worded verse before ending on the chorus once more.
It really is like Scott is having the listener experience a form musical inebriation, from when the sound gets all floaty and disjointed to the sudden, "Crash," of the high ending and the beats getting faster and more aggressive. Sure, the lyrics throughout most of the song may not be that impressive, but the strange distortions of Scott's voice, broken-sounding instruments, and general auto-tuned weirdness create a song that is a sonic delight. I tip my hat to Travi$ Scott and his producers.
Posted by David Charles Bitterbaum at 3:08 PM