They Just Keep Screwing Over Amanda Knox, Don't They? 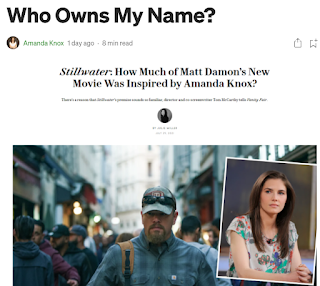 Amanda Knox was the roommate of a young woman who was murdered. She had zero involvement in the murder, she was just the lady's roommate. However, she was an American in France and the police zeroed in on her as some kind of suspect and it ruined her life. She was wrongfully convicted, acquitted, convicted--it was a mess. She should have been on the periphery of any stories but instead became the focus. She got back to America and tried to live a normal life. However, the media harassed her. People stalked her, and, "Stories," were made of her life that she did not approve of and which often smeared her. Now, a movie that draws heavily from her life but also warps a lot of elements, "Stillwater," has her asking, "Who Owns My Name?" in an extremely thoughtful essay. For those wondering, the movie has no relation to the current sci-fi comic.

The people behind, "Stillwater," didn't reach out to Knox at all. They just bragged they were drawing from her story. They changed things just enough Knox can't really do anything legally or demand money. She isn't threatening to sue or asking for financial compensation anyway, she mainly just wants to be respected and--even better if possible--left alone. Let Amanda Knox live her life without everyone sensationalizing it and trying to paint her as someone besides an innocent woman who was wrongfully accused of a murder she had nothing to do with.