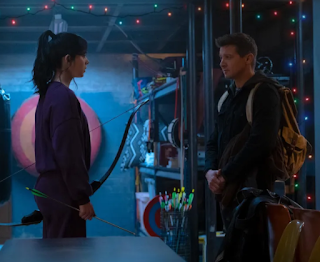 Everyone's least-favorite Avenger, Hawkeye AKA Clint Barton, has a show on Disney+ which debuts this November 24th. I am excited for, "Hawkeye," but I'm excited for basically all the reasons that don't directly involve Jeremy Renner's character. No offense to Renner, but his portrayal of Hawkeye is generally not that interesting. However, we will be getting the appearance of Echo/Maya Lopez (played by Alaqua Cox), Kate Bishop/the younger Hawkeye (played by Hailee Steinfeld) and if you've seen, "Black Widow," you may know that (spoiler alert) the latest Black Widow (played by Florence Pugh) is going to be going after Clint Barton too. In essence, I'm more excited for the supporting cast than I am for Hawkeye himself in the show.

It's not like Hawkeye always struggles to be interesting in the comics. Matt Fraction and David Aja had that good run some years ago. Back in the 1980s or so Hawkeye led the West Coast Avengers--a team of reformed baddies and heroes often considered too extreme for the, "Regular," Avengers. I swear Hawkeye can be interesting, he just usually isn't on the silver screen! Perhaps a television show will help to flesh out Clint Barton and let Renner stretch his solid acting chops (dude has done a great job in other properties besides Marvel stuff). Plus, as I said, we get a fantastic supporting cast that has me excited for the show, regardless of how boring Hawkeye sometimes is to watch. Now then, when will, "Ms. Marvel," be out as that's due this year too, right? I'm even more intrigued by that show.