"Something is Killing the Children," gets a Spin-Off Comic, "House of Slaughter." 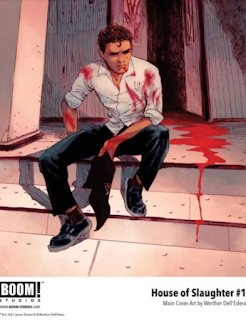 The comic, "Something is Killing the Children," has been a huge hit. It follows a lady named Erica Slaughter who fights monsters that, well, kill children. I don't love the series as much as some other stuff written by James Tynion IV, but it is interesting. The book has gone bonkers in terms of everyone wanting to get earlier issues and the new ones coming out sell like hotcakes. An option with Netflix was just announced as well. A spin-off was revealed today, "House of Slaughter," and the press release hints it might be the first spin-off of many.

"House of Slaughter," focuses on another character in the main comic, Aaron Slaughter (everyone comes from a mysterious group hence the shared last names) back when he was younger. It's probably going to get a ton of orders considering how huge, "Something is Killing the Children," has become. I like a lot of Tynion's stuff so I'm just happy his comics are doing well--for my money, "The Department of Truth," is the best thing he's currently putting out though.

Email ThisBlogThis!Share to TwitterShare to FacebookShare to Pinterest
Labels: BOOM!, comics, House of Slaughter, internet, James Tynion IV, news, Something is Killing the Children, The Department of Truth