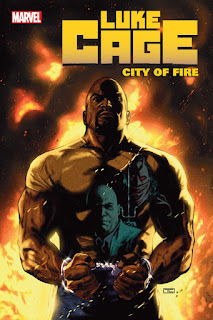 Marvel announced today the first new, "Luke Cage," comic in a while. It is a three-issue mini-series titled, "Luke Cage: City of Fire." It sounds like it won't hesitate to be topical and features Luke working with the hero he teams up with the most besides Iron Fist, Daredevil. Here's the blurb:

"In the new series, a shadowy rogue group named the Regulators are terrorizing ordinary citizens in New York City, and Luke Cage is called to action when a Black man in his community is murdered by a crooked police officer. Cage quickly crosses paths with Daredevil, who is determined to bring down the Regulators no matter the cost, but Mayor Fisk is equally determined to use them to tighten his grip on the city. There is unrest in the streets, and it’s up to Cage to keep the city from going up in flames."

I keep forgetting Wilson Fisk somehow became Mayor of New York City in the comics (I think J. Jonah Jameson was mayor at one point too some years ago). Creator Ho Che Anderson is making his Marvel, "Debut," writing this comic and the artists will change issue-per-issue which will either be really cool or disorienting if other comics that have done that trick in the past are any indicator. I'm just excited to be getting a new Luke Cage comic and bet Anderson and the group of artists will make something pretty snazzy.