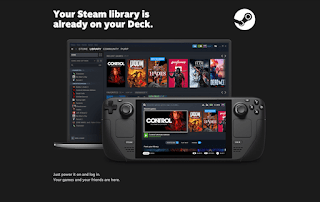 Back in January of 2020, I observed how there were rumors of companies making handheld computers that were designed to be kind of like the Nintendo Swtich or just outright ripped it off. It is now 2021 and Valve just recently unveiled the Steam Deck. The Steam Deck is designed to connect to Valve's online computer gaming store (the biggest one in the market for digital games) which is known, of course, as Steam. Many companies that utilize Steam are down for being a part of this device and its prices will vary from the competitive-with-a-Switch $399 to more fancy models that'll run you cool 650 smackers. A portable gaming PC you play like a handheld sounds intriguing. I'll be keeping my eye on the Steam Deck and think that Valve's influence in gaming definitely gives them enough power to maybe have this thing succeed.