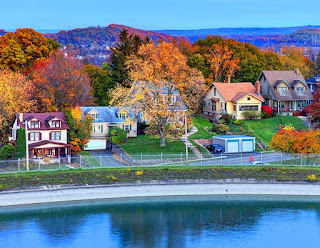 I live in the Saint Louis region, but as longtime readers of my blog may recall, I used to live in Upstate New York AKA Central New York AKA the region where the cows outnumber the humans. It had been a while since we were able to visit my family but we were just recently able to do so. When we had some free time I was able to stop by some fantastic comic stores. Some I've maybe mentioned before, others are new (at least in terms of me discussing them). Should you get to the upper-central area of NY you should give these places a visit! 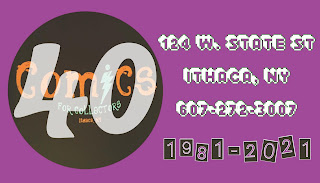 Comics for Collectors used to be at one end of the Ithaca Commons, but about two years ago moved to the opposite side. The owner, Tim, is a fantastic guy full of knowledge about comics. There is a wide assortment of new releases, a good chunk of back issues, and plenty of hardcovers and trades to explore as well. The shop is celebrating its 40th anniversary this year and may it have many more! 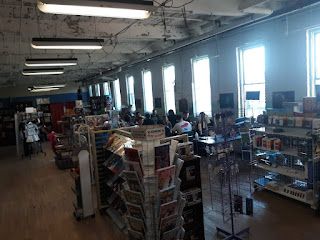 Found in Cortland--smack dab between Ithaca and Syracuse. Heroes and Villains is located with other businesses in the old Cortland Corset building that was retrofitted to fit an assortment of snazzy stores, "Heroes and Villains," was on the first floor but now is on the second of the big former factory. The owners are extremely nice and there is a good selection of current releases, trades, and back issues to enjoy digging through. Should you need magic cards or the like they carry those too! 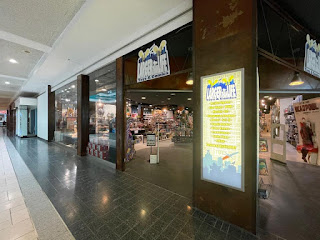 Larger than Life Toys and Comics

I discovered Larger Than Life Toys and Comics when my family took a trip during the day to the Syracuse Mall/Carasouel Mall/Destiny USA/Whatever you want to call it. They have another location in Clay, New York, as well that is probably cool as this location was awesome! There are tons of vintage and newer toys, Funko Pops, and shortbox upon shortbox full of back issues you could inspect. I didn't have a ton of time to check the store out while there, but what I did see was stellar. Next time I'm in town you know I'm gonna do a deep-dive on those older issues!