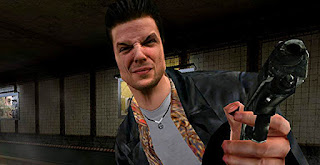 I've always been a fan of the, "Max Payne," series. Three games in total--the first two developed by Remedy and the 3rd by Rockstar--they each had their charms. For my money, the 2nd one was the best, but the first is still a grand time. It is now 20 years old, believe it or not.

An over-the-top story about a cop fighting a big conspiracy, "Max Payne," is drenched in a noir tone. It is full of, "Bullet time," where you leap and drive in slow-motion while shooting your gun, and is possibly best known for Payne's angrily scrunched-up face that was provided by developer Sam Lake. It inspired an incredibly poor movie and, as I mentioned, had some stellar sequels. As far as I know, we shouldn't expect any more games with Payne anytime soon, but what we got was snazzy indeed.