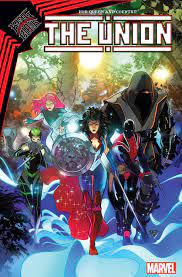 "The Union," was a fun comic by Paul Grist and Andrea Di Vito that received almost no attention. This was odd as Grist is a popular writer and artist. He has done some fantastic less-than-mainstream work, with this mini being a relatively rare example of work for either of, "The big two." Focused on a team of heroes from the United Kingdom dealing with Brexit as well as the latest huge Marvel event, it was solicited at first to tie in with, "Empyre," but a lot of tie-ins for that were derailed by the comic distribution shutdown COVID-19 caused. It was seemingly canceled, but then came back with a solicitation linking it up with Marvel's big, "King in Black," event. The earlier issues heavily utilized, "King in Black," but then the comic went off to tell its own interesting tale.

Focused on an assemblage of known, lesser-known, and (I think) outright new heroes from the UK, we watched as the latest Union Jack struggled to keep a team together through death, destruction, and messy politics. It was a lovely read and considering the talent involved (again, Grist is great and Di Vito is a fantastic artist too), it was odd how little an impact, "The Union," made. Perhaps the fact it started as a tie-in to an event that was pretty mediocre sunk it? I don't know as you honestly could read, "The Union," and skip, "King in Black," as long as you have a general understanding it involves an evil Symbiote God who wants to destroy Earth with darkness caused by symbiote goo. 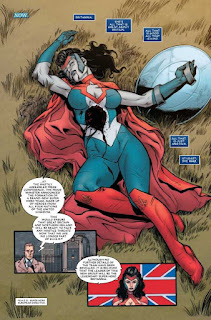 My favorite twist is how one seemingly main character--and the heart of the team--Britannia, is killed in the first issue by the invading symbiotes and then the rest of the series examines the fallout of what it means when the person who is also a symbol that stands for everything you love about your country is suddenly gone. That sounds very dark and dreary, but, "The Union," works in a lot of humor as well (I loved the Corgi). It is just a great read and you should check, "The Union," out regardless of your interest in, "King in Black," or Marvel in general as stands out nicely as just a stellar little mini-series.