The Heroes for Kids Comic-Con Was Great Fun!

I attended the Heroes for Kids Comic-Con today and had a fantastic time! Heroes for Kids is a nonprofit and they held this con to raise funds and give everyone a great time. I went down to Perryville with my good friend Greg and we had a stellar time seeing old friends, making new ones, and (obviously) buying comics.

One of the first people I met and really enjoyed talking with was Eric of PJ Comics. I bought some cool stuff from him including a, "Batman," #6 from the New 52 era with beautiful Greg Capullo artwork and a, "Secret Invasion," #1 second printing variant cover (ya'll know love snazzy variants). I also met Ethan from E&A Comix who had an assortment of cool stuff (including some stellar, "Daredevil," issues from the Bendis and Maleev run). I bought some cool, "Avengers," comics from Red Brick Collectibles as well. I checked out some laser-etched items by Mr. Laser which were snazzy, saw my friend Justin of Wayne Kent Comics, and saw the always-delightful Bruce Reynolds. He had a bunch of comics for sale! Bruce was kind enough to let me snap a pic of him with a chunk of his wares: 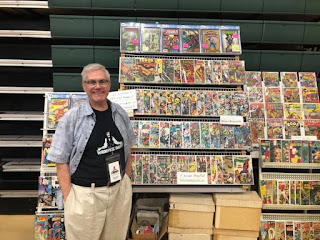 I proceeded to meet some really cool creators. I met sci-fi and fantasy author Jason J. Nugent, chatted with author and artist Chely Penn who had some really snazzy prints for sale, and had the pleasure of meeting the author and cartographer Ellie Mack--she can custom make maps for RPGs and such! I talked with author Molly Daniels as well. Then I met the folks behind Russxplode Studios who had a fun book called, "Xenonanite Titan!" I met Lacye Lembcke, one of the creators of the cartoon Dope Bunny and Clive. I saw my friend, author J.E. Nelson (we had just chatted at Toyman last week too), and met artist Breanna Horneker. I had the pleasure of meeting author Ellie Mack and learned about her cool book, "The Awakening." I also saw Bradley Potts, who I've written about before, selling his awesome comic, "Stalker." 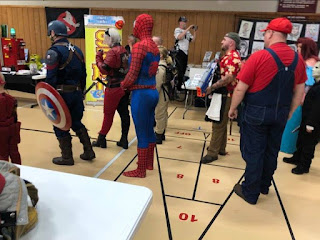 Before heading out in the afternoon, Greg and I watched a fun cosplay parade (a pic of some of the lineup is above) and I had some coffee from Villainous Grounds--a shop in Perryville that sells comics and coffee! The Heroes for Kids Comic-Con was a real treat to attend and I already can't wait for the next one in 2022!