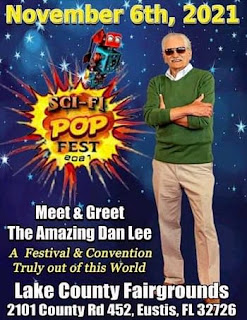 Dan Gruden had been told off and on for some years he looked like Stan Lee. His grandkids told him to dress up like Stan and go to comic-cons. He did and folks loved it.  Comic-cons went away due to COVID-19, but now they're back and so is Dan Guden, or as he goes by when cosplaying, "Dan Lee." The whole thing is weird and would seem a little off-kilter except for the fact that knowing the kind of person Stan Lee was, he would love this. Stan was always a big fan of wild and showy things, were he alive he'd probably want to have a bunch of pictures taken of him and Dan, make jokes about being, "Brothers from another mother," and such things. The fact Stan would appreciate this makes me okay with how it is a little strange. We've got Elvis impersonators, don't we? Well, now we've got Dan Lee, coming soon to a convention near you.