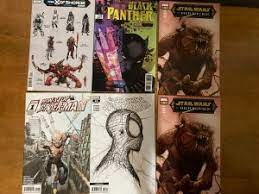 Okay, it has been an odd week when it comes to comic books and that infamous evil empire, Walmart. I'll try and break it down a bit.

Basically, every quarter or so Walmart releases comic packs from DC and Marvel. The Marvel ones usually have a variant cover of a popular comic with the, "Variant," being unique cover artwork or a change in the color of the title's text. There are two other comics in there and they usually are just random filler stuff, sometimes a cool second printing variant of a title, but nothing too wild. That changed with the latest round of packs. 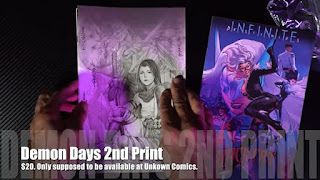 People picking up the latest Walmart comic packs were getting the usual variant you saw on the front of the pack, but then they were pulling ratio variants that were supposed to be very rare. 1:50, 1:100, 1:1000, store exclusives, creator exclusives, things that shouldn't be in these packs. Someone in a factory really messed up. Bleedingcool has given it the somewhat unimaginative name of, "VariantGate," but sure, we can call it that. Is this the fault of Diamond, liquidating old Marvel comics because soon they won't even be dealing in Marvel comics besides as a wholesale option in the near future? Is this Marvel's fault for printing an excess of certain covers to have in place in the case of damages and some boxes of rare ratio variants that were supposed to be put aside got inserted in packs? I don't know who is to blame here, but it is a mess.

People pay a lot for these supposedly rare ratio variants and suddenly some seem kinda worthless. It shows how the whole, "Ratio variant," market is kind of a scam that could very well lead to the next comic-market implosion like in the 1990s, but I digress. Walmarts have been full with folks trying to get these packs and I will disclose I was able to get some before the news really started trending about these. All my packs lacked anything of note. Considering how rapidly these variants could fall in value if the market floods with them you should flip them if you got them!