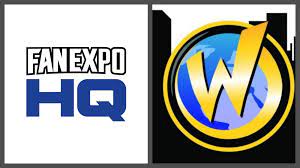 Wizard was a popular comic-book culture magazine. The magazine ended but they did the Wizard World cons that were pretty popular. I attended a number of them in Saint Louis and generally had a good time. It seems Wizard is done with the con biz, however. They have sold the business to competitor Fan Expo. Fan Expo will assume control of all the planned Wizard World cons after Wizard World Chicago in October. The upcoming cons--including one in Saint Louis--will be rebranded as Fan Expos and I guess all the contracts Wizard had with various celebrities and such are gonna transfer to Fan Expo for shows in 2022. I have no clue if this is going to be a good thing or a bad thing, but I'm definitely interested in seeing what a Saint Louis Fan Expo will be like.

Posted by David Charles Bitterbaum at 9:18 AM