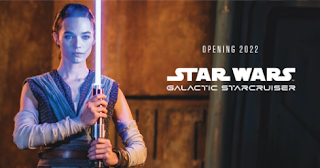 Disney hotels can cost a chunk of money, and then you add the cost of going to the park, food, souvenirs, and you've spent a bundle. That said, Disney parks are admittedly really fun. However, I don't think I'd feel comfortable dropping $6k to stay at the new Star Wars hotel for two days if I have a family of four (at least two people is a, "Cheap," $4,800 or so). It is called the, "Galactic Starcruiser," and it ain't cheap. Why is this so expensive? You get to dress up as a Star Wars character, go on quests at the hotel with staff who are pulling a, "Westworld," and pretending to be a part of the Star Wars universe, and there is themed food, you get to visit the Star Wars area of Disney's Hollywood Studios (or as I always still call it, MGM Studios). Still, six thousand dollars for two days? Also, this is the only Disney World hotel with no pool, in case you wondered.

Why not have a hotel that is a regular Disney hotel--the staff doesn't roleplay or anything--and you pay the usual Disney hotel prices but get some nice Star Wars decor? If you want to shell out another grand for activities, quests, and themed food, go for it. I'm just baffled someone would want to spend this much but I also know there will be a long waitlist because for some people a trip to Disney is the highlight of their year. They eat, sleep, and breathe Disney and/or Star ars. Saving up for this is not a huge deal to those kinds of folks or other people who kinda like Disney and Star Wars but also have a ton of cash to burn. I just hope for $6,000 you get to keep some souvenirs like a space-robe or something.