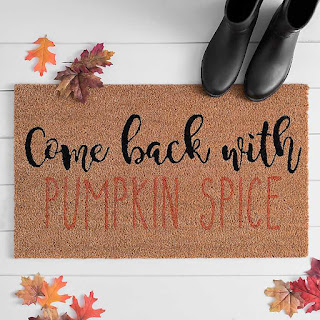 Every year it occurs earlier and people say it is happening too soon. Every year they call me, "Basic," for being excited. Every single year I do not care and just smile at their complaints and insults because I'm happy. Yes, I'm overjoyed that pumpkin spice is back!

Today, Starbucks officially is selling its delicious pumpkin spice latte along with the admittedly mediocre pumpkin cream cold brew. They also are launching an apple crisp macchiato, which sounds intriguing and worth a try. If you're ant-Starbucks but still have a hankering for a pumpkin product there is no need to fret. Dunkin' has its own fall flavors and if you're feeling really frisky then it might interest you to hear Panera temporarily has a cinnamon toast crunch latte inspired by their popular bagel.

Yes, it is still August and so hot outside that more than half the nation is under heat advisories. You know what, though? The Spirit Halloween stores are opening up within the carcasses of shuttered businesses, pumpkin spice is back, and I'm gonna party like it's Fall.

Posted by David Charles Bitterbaum at 9:15 AM