Flashback Friday/Film Friday: "13 Going on 30," and Its Clever Twist 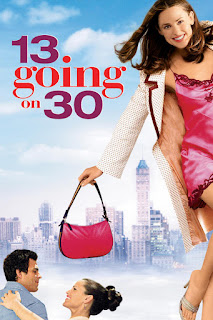 Here is one of those occasional combo posts--a Flashback Friday looking at the past and a Film Friday all smashed together like a delicious sandwich...or something. Anyways, I was reading an article on, "The A.V. Club," where they've been examining romantic comedies and talked about, "13 Going on 30." I agree it a solid flick with a lot of the praise for its quality being due to the casting of Jennifer Garner and Mark Ruffalo as the main characters and other stellar supporting folk such as Judy Greer and Andy Serkis (as a human, not a green-screen creature).

The overall idea is how Garner's teenager character wishes to be an adult then wakes-up in 2004 suddenly 30 years old with no memory of the years between in her life. She seeks out her old Junior High friend (Ruffalo) whom she lost touch with and it is sweet and touching, but one thing that stuck with me with but which people seem to not discuss that much (and the A.V. Club only touches on briefly in their post) is how the real bad-guy turns out to be Garner herself. Judy Greer is portrayed as a friend who is conniving but Greer herself reveals that Garner (before her young-self awoke in a grown body) has been leaking secrets from her magazine to a competitor, has been a mean terrible person, and otherwise is an awful human being.

It is an impressively dark twist for Garner to learn the person who arguably thwarted her attempt to be a happy and successful adult was her own damn self. It is harsh already and then Garner even gets shut down by Ruffalo when she tries to win his heart as a last-ditch effort to be happy in this bleak future for herself she's awoken in. Now, of course she is able to go back in time and do stuff right (the movie avoids commenting on if she uses her knowledge of the future to get rich or anything, that'd be interesting) for a happy ending, but that little twist there is pretty killer. It is one reason, "13 Going on 30," is one of those movies for me that elevates itself beyond, "Good but Forgettable," into, "Quite Clever,"," kind of like that one scene I wrote about previously in, "The Wedding Ringer," an otherwise unremarkable movie with one shockingly smart moment.

"13 Going on 30," is not the best romantic comedy ever (that is eternally up for debate, but I vote, "Bridesmaids," myself) but it is a solid one with that awesome little miserable twist at the end before it undoes everything bad for a happy ending (which is understandable as this is a rom-com). Between the stellar cast and solid plotting it elevates itself beyond other romantic comedies that are just kind of, "There," and completely unmemorable--I'm looking at you, "27 Dresses."
Posted by David Charles Bitterbaum at 6:31 PM