Suddenly Marvel is Really Big on the Fantastic Four and X-Men, For Obvious Reasons 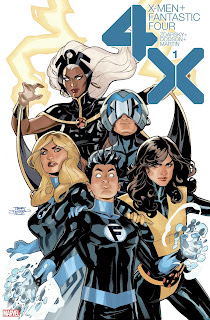 Remember when Marvel claimed they were cancelling, "Fantastic Four," because it was comic that supposedly nobody read--with the cancellation happening right when the most recent movie (which was owned by Fox which at the time was not owned by Disney) came-out? It bombed, but that was because it sucked, not due to a lack of the comic. Also you may remember when Marvel was desperate to make the Inhumans popular as a newer-and-better-X-Men and even had plans for movie before that got scrapped and any concepts were dumped into a television show that lasted a season (and was quietly forgotten about by everyone so I forgive you if don't recall that)? Well, ever since Marvel and its parent Disney got the film rights back to the Fantastic Four they sure have been giddy about doing that big relaunch of the comic with the characters and having them pop-up in other books at assorted points; plus now that the X-Men have their film right's under a tight grip with Marvel/Disney those books have been having a renaissance too. Well, as if to further the point that thanks to having the movie-rights Marvel is pumped-up about the Fantastic Four and X-Men here comes a cross-over comic bluntly titled, "Fantastic Four/X-Men."

Now, the Fantastic Four and X-Men do not interact too much in the comics, but there is one big thing that unifies them which came about in the 1990's if my memory of that era serves me correctly. Franklin Richards, the son of Reed Richards (Mr. Fantastic) and Sue Storm (the Invisible Woman) is in fact a mutant, and an incredibly powerful one. While he is just a young child he has abilities that are almost God-like when he doesn't try to block-off his powers lest he destroy reality. Now, the X-Men have of course recently established their own Nation for mutants and prefer that anyone who is a mutant goes and lives there, so that's created some friction between the X-Men and the Fantastic Four (touched upon briefly during the recent, "House of X/Powers of X," series where the Fantastic Four popped-by briefly) as while Franklin's parents may have powers, they ain't mutants--it was some weird space-stuff that gave them abilities along with Sue's brother, Johnny Storm (the Human Touch) and friend Benjamin Grimm (the Thing). 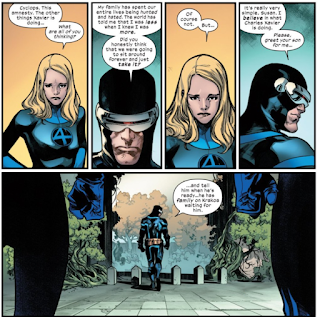 The new comic, "Fantastic Four/X-Men," will be written by Chip Zdarsky and have art by Rachel and Terry Dodson, so it's a solid creative team for sure. It is a four-issue mini-series so it also will not wear-out its welcome and most likely there will be other little mini-series in the future tying-in the X-Men with other heroic teams they may butt-heads with. It makes sense as the main X-Men books may be busy telling the epic yarn kicked off by, "House of X/Powers of X," and now continuing in like 8 different comics because--as I said--Marvel is suddenly really big on the X-Men now thanks to getting the film rights back. The comics that have been coming out with all these hero-teams have been pretty good, so I guess even if Marvel/Disney acquiring Fox and the hero-teams it owned the rights to is another example of corporate monopolization to the point where eventually 3 or 4 mega-companies will own everything, at least we get some more good comics out of it and eventually some flicks...right?
Posted by David Charles Bitterbaum at 12:35 AM