"Magnus the Brave," #2 is Extremely Over-the-Top, and Incredibly Fun! 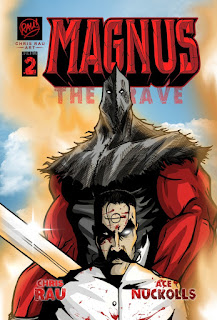 Readers of my blog may recall back in February I talked about how I had the opportunity to read an advance digital copy of the first issue of, "Magnus the Brave," which was doing a Kickstarter campaign to raise funds for the book. Created by Chris Rau and Ace Nuckolls the first issue followed a Barbarian engaging in all kinds of fighting in a manner that was both brutal (like, "Conan the Barbarian," yet very frantic and fast-paced with a dose of special magic kind of like you'd see in an anime program along the lines of, "Dragonball Z." Well, they recently had a successful Kickstarter campaign for the second issue and are in the process of getting it sent-out to backers. Chris asked if I'd like to review the second issue and I was happy to oblige!

If the first issue of, "Magnus the Brave," could be considered bloody, then this issue takes things to a wild extreme. Magnus finds himself fighting an evil religion dedicated to a violent God named, "Tauron," which has taken over a city he is simply trying to pass-through and between the decapitations and explosions of viscera things get pretty nasty! However, thanks to Rau's more cartoonish-style of drawing the violence is not so much obscene as the kind you would expect to see in an over-the-top anime or video-game. Yes, it is excessive, but that is the point! 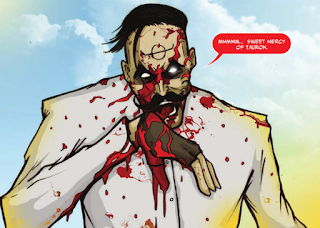 Also, the fact that Magnus is so nonchalant about all the brutality he has to engage in gives everything a bit of a humorous edge as well, with Magnus not taking things so seriously so that readers know its okay to crack a smile at the absurdity too. That is not to say this is comedy comic, there are serious elements, such as how one of the head priests of the, "Religion," dedicated to Tauron is admittedly quite creepy (he can be seen covered in blood on the cover and above in his white outfit).

There also is some introspection as well, with Magnus admitting to himself a part of him loves the chaos of battle and if anything scares him it is arguably a quite life without violence and bloodshed. Yes, I would say this second issue of, "Magnus the Brave," does a fantastic job balancing hilarity with insight, as well as gore with humor. 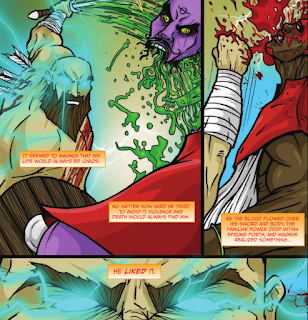 The second issue of, "Magnus the Brave," is fantastic stuff and if you were too late to back the Kickstarter you do not need to panic, as you can buy physical copies of this latest issue from the online store for the comic on Etsy! I rate this issue 5 out of 5 stars and look forward to issue #3 in the hopefully-near future!
Posted by David Charles Bitterbaum at 3:33 PM