"Dog Man," By Dav Pilkey is Fun For All Ages! 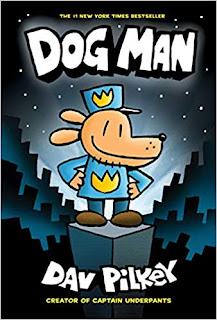 From when I was a young and over-energetic child to now as an old and over-tired adult I have always loved book fairs. With my wife being a teacher it is always fun to swing by her school's book fair when it happens and get quality titles for our son, Clarkson, and anything else I think looks interesting and might be worth reviewing. This led to me purchasing the first book of, "Dog Man," which is done by Dav Pilkey. Pilkey has made many works, including his famous, "Captain Underpants," series which I read a lot of growing-up. "Dog Man," is actually kind of set in that Universe, a comic-within-a-story focused on how the two young kids in the, "Captain Underpants," stories, George and Harold, create a comic about a policeman and police-dog who due to an explosion that wrecks some of each of their bodies find themselves combined into Dog Man. It is very silly and quite fun.

"Dog Man," has assorted chapters that follow the creation of Dog Man and his tackling of assorted cases. Whether he's revealing how the mayor is corrupt or trying to encourage people to read so that they don't get too stupid from a lack of books (an evil cat named Petey tries to erase all books) Dog Man is a funny and sweet character, even if his tendency to jump-on and lick the police chief can get him yelled at (he does have the head of a dog after all). While the, "Captain Underpants," books would be a mixture of prose and images, "Dog Man," is a full-on graphic novel and works well in that format. It is quite often hilarious and a good mixture of clever jokes and outright potty-humor. It has a good message too for kids (being true to yourself, reading helps you be smart, stuff like that), but avoids being overly preachy thanks to its ample supply of giggles it provides readers. Dav Pilkey has spent decades making great books that all ages can enjoy and as, "Dog Man," and its (apparently numerous) follow-up books show, he ain't slowing down with his quality anytime soon.
5 out of 5 stars.
Posted by David Charles Bitterbaum at 10:49 PM