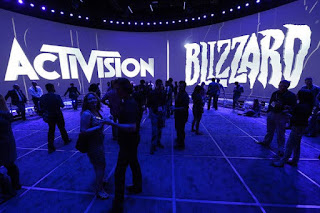 Excuse the lengthy headline/post-title, but it is hard to sum all this up with just a few words. Essentially, long-time beloved video-game company Blizzard (officially known as Activision Blizzard, but most just say Blizzard for short) which has created such fan-favorite titles as, "World of Warcraft," "Hearthstone," "Overwatch," and the, "Diablo," series has become the object of scorn from video-gamers due to their reaction to the Hong Kong protests--namely, their treatment of a pro-gamer who spoke-out in favor of Hong Kong being free from China's rule. Yes, video-gamers are actually unified and mad about something good right now like Democracy instead of the usual bullshit we see from things like, "Gamergate." I know, its weird.

Essentially, Chung Ng Wai, a Hong Kong-based player of Hearthstone who goes by the name “Blitzchung,” was speaking online during an official interview on Sunday held after he won a match in the Hearthstone Grandmasters tournament. He stated, "Liberate Hong Kong, revolution of our time," while wearing a face-mask as many protesters in Hong Kong have done where for months now there have been demonstrations protesting mainland China's efforts to exert more control over the semi-autonomous region (China was given control of Hong Kong from its former, "Ruler," the United Kingdom in 1997 and it stated it would let the island-city essentially rule itself for at least 50 years). After this he was stripped of his title by Blizzard, told he would not get his prize money, and was banned for a year from Tournaments for his, "Controversial," comments. The interviewers who supposedly goaded him into making his statement were fired as well. Why such a reaction from Blizzard? Money, obviously.
Blizzard makes big bucks in China, and if the Nation were to become angry with its actions that would cost a lot of dollars. It isn't just Blizzard who has felt the sting of Chinese censors wanting the company to toe the line, the NBA has seen some turmoil, and a recent episode of South Park lampooned how much Disney is careful to edit its movies to appeal to the strict Chinese rule (Winnie the Pooh is seriously banned there due to his use as a political symbol). Blizzard acted the way it did to appease Mainland China and as a result gamers Worldwide and in America especially who up to this point maybe did not even care about the protests in Hong Kong are incensed as a community. More pro gamers are speaking-out, Blizzard's company philosophy is being mocked, there is a proposal to take a popular character from, "Overwatch," named Mei (who is from China in the game) and make her a symbol of gamers being oppressed for speaking out with pro-Hong Kong views.

Blizzard has gone from being a fan-favorite company to being reviled by basically everyone in the span of a week and the company is honestly between a rock and a hard place. Do they apologize to the pro-gamer for expressing his views and lose billions in Chinese revenue or hold the line and risk tons of bad press and boycotts that could also cost them billions in revenue from other gamers around the World? I myself have not played a game by Blizzard for some time but in the past enjoyed, "World of Warcraft," "Hearthstone," and, "Overwatch," before eventually growing tired of them.

I also do not know nearly enough about the complex political situation between Hong Kong and China to offer a solid opinion beyond hoping something can be worked out so that everyone is at least somewhat happy in the Governments of both places. I have no idea what Blizzard should do, but they really need to come-up with a plan or at least put out a statement to all the press entities requesting answers about what the company's official position is on all this because the big convention they hold, "Blizzcon," is mere weeks away and that could become an unholy mess. Right now I'm just pleased that video-gamers are actually showing solidarity, unity, and expressing outrage over something that actually is a big deal. I'm proud of gamers, and that is a weird feeling I have not had in some time.
Posted by David Charles Bitterbaum at 11:31 AM