The World Series Got Really Cool for a Minute 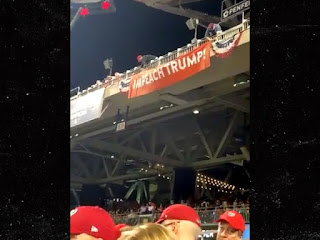 I am not a big fan of baseball, or sports in general. The one sport I do enjoy and follow to some degree is hockey, because the mixture of grace, brutality, and its fast-pace keep my interest. Baseball however bores me, which can cause people to gasp when I say that here in Saint Louis, where folk really love the Cardinals. Hence, while last May and June I was incredibly excited to see the Saint Louis Blues win the Stanley Cup I had a general disinterest in how the Cardinals were doing in their attempt to get to the World Series (they didn't make it) and I was unsure which teams were even playing. Well, I know now, because last night the World Series got really cool for a minute. The Washington Capitals are competing in the World Series against the Houston Astros and were playing a game in Washington D.C. last night. Donald Trump showed-up, and in Washington D.C. itself, in a stadium filled with a lot of middle-aged white-folk (his supposed bread-and-butter), the crowd spontaneously began chanting, "Lock him up," loudly. Trump looked displeased.

It was glorious, and I don't care what people say who think it was some kind of hoax, conspiracy, or whatever, I believe this was just proud members of our Country expressing their opinion about the worst President ever. As for anyone who insists we should at least respect office of the President and, "Be civil," or whatever, I find it interesting many of the folk saying this also were relentlessly negative about Barack Obama for reasons they didn't want to fully admit (he was black, and this made them never recognize him as a legitimate President with lame made-up ideas he was somehow not really American, was a secret Muslim Extremist, or other nonsense). Trump is an awful human being, which admittedly does not disqualify him from being President, but he also has been committing numerous crimes and abuses of power, which means those acts should lead to his impeachment. The man frankly belongs in prison, so he should be locked-up, honestly.. If it is petty to be giddy a crowd at a baseball game chanted, "Lock him up," then I guess I'm just petty. At least it made the World Series (and baseball) really cool, even if for a brief moment.
Posted by David Charles Bitterbaum at 12:50 PM