Wait, We Aren't Supposed to Use Any Bathroom on a Flight That's Available? 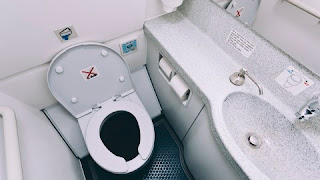 I hate flying. I despise it. Airports are cramped, loud, busy, and smell bad. Planes also are cramped, loud, busy, and smell bad (this time with the weird recycled air). You sometimes spend more time getting to the airport early to get through security and wait for your flight than you actually do, you know, flying. I am not opposed to flying out of fear of the plane crashing, or such, I know the odds of that are quite minimal. I hate flying because the whole process is just miserable and may God take mercy on your soul if you have to use a terrible airplane bathroom. Also, apparently we aren't supposed to just use any bathroom that's available, which sounds like another wonderful thing to add to my extremely lengthy list of why I hate flying.

To clarify what I'm talking about, someone on an Alaska Airlines flight was apparently mad and uttered threats when on their plane there was a long line for the bathroom in the back of the plane but the one near the front by first-class was occupied but had no line. They were told to wait in the back, and got mad. Now, the bathroom at the front of the plane is not nicer just because it is by first class and apparently the reason they were told not to stand in the front was the safety issue of it blocking the cabin to the captain in case the flight crew needed to go up there (the bathroom was occupied after all). Also, threatening your flight servers is stupid. All of that said however, I do understand how annoying it would be if there were a seven-person line at the back of the plane for the restroom and zero people up front waiting for a toilet that was going to only be occupied a little while longer. Yeah, I'd be pissed if they told me it was a safety issue to lounge-around in the front waiting. I would follow the directions and wobble to the back-toilet (I'd wobble as I get really drugged-up on stress medication and nausea pills before flights), but I'd be angry.
I've just always been under the impression if there are toilets available (or soon to be available) we just got get in line for them. Now, next time I fly I have to worry about too. My wife has told me I'm terrible to fly with due to the fact I get stressed, grumpy, and then barely-conscious when my meds for the flight kick-in. I'm sure I'll be even worse to fly with now panicking about if I'll get to the correct toilet in time should I get sick to my stomach after turbulence. Yeah, just say no to flying and take the train instead if it is an option, they are a lot more fun in my opinion.
Posted by David Charles Bitterbaum at 12:36 AM