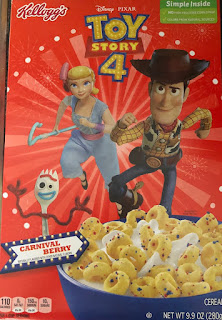 One thing that big media properties like to do is have random tie-in products. Some things make sense, like having action figures for the latest, "Avengers," movie of everyone's favorite heroes. Also, when a movie is called, "Toy Story 4," you obviously are going to have toys that tie-in with it seeing as you're on the fourth entry of a very successful franchise, but then you get the aforementioned random stuff, like cereal. My wife and I were at the Schnucks grocery store and say this, "Toy Story 4," cereal was on sale and had a coupon that made it a dollar a box to buy two. We figured we would try it out and if we hated it give the other box to a friend. Imagine my surprise upon discovering this cereal was incredibly tasty.

Seriously, a lazy tie-in cereal for a movie has logical reason to taste this good. It is advertised as, "Carnival berry," and is shaped a bit like a Fruit Loop, but unlike Fruit Loops tastes good (yeah, I said it, come at me Toucan Sam fans). The berry taste is not at all overpowering or artificial, as you'd expect. It is mild but clearly present enough to feel welcoming yet not insistent. The cereal itself also stays pretty firm even upon sitting in milk/almond milk/your preferred cereal liquid for a decent number of minutes (some cereals get absurdly soggy really fast). I don't know why, "Toy Story 4," cereal tastes so good, but it does and now I'm tempted to stock-up on a bunch before it vanishes from shelves to make space for the next tie-in cereal that is bound to be released in the near future. Should you have a chance to try this out do not hesitate, you will be amazed at how delicious it is.
Posted by David Charles Bitterbaum at 11:28 AM