Flashback Friday/Film Friday: There is a Good Movie Somehwere in, "Hancock." 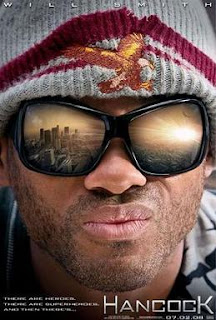 People liked my post looking-back at, "13 Going on 30," so lets do another combination Flashback Friday/Film Friday, shall we? For this one, let's look back to 2008, a simpler time when the iPhone was barely a year old and more of a luxury-item to own (as opposed to how now everybody wants one), our President was a man named Barack Obama who did not hurl grade-school insults at people on Twitter unlike our President in 2019, and the movie, "Hancock," was released. It has just been a decade but the World has changed indeed.

"Hancock," was the Will Smith movie where he played a super-hero and the previews made it look like a very different movie compared to what was released. If you watched the previews you saw how Hancock was a bit of a loser. He had superpowers but he was always drunk (somehow, even though he was invincible) and caused a lot of damage in the city of Los Angeles where he was seemingly homeless but would stop crime in between eating, sleeping, or drinking. Also in the previews we see how he ends-up becoming friends with an advertising professional played by Jason Bateman and agrees to actually go to prison for all the property damage he has done (even though no prison could hold him) in an effort to fix his image and show the city needs him.Then in previews we are shown how he then is let out of prison to stop a dangerous bank robbery and now is beloved by the city and confused by actually being hailed as a hero. Sounds interesting, right? Unfortunately even though that is what all the previews for the movie indicated we would be in for, that is actually maybe the first 30 minutes of this flick that then morphs into a wreck.
We learn that Hancock has been alive for at least centuries but has no memory after the 1920's as he doesn't age but something happened that made him forget the past. Apparently he's been a hero for decades, something the movie does not mention until pretty far in. Due to his lack of memory he literally just goes by John Hancock. Wait, it gets weirder! Jason Bateman's wife, played by Charlize Theron, has powers too and she and Will Smith apparently were these special ancient beings who were immortal unless they are in close proximity to each other at which point they would slowly become more human and eventually age and die. Smith and Theron were a special couple and even though they would always get separated he would find his way to her over a century or two, which he had now done after they were attacked outside of a movie theater in the 1920's and that attack caused him brain trauma or something. BUT WAIT THIS SHIT GETS CRAZIER!

Theron has weather-powers and can make weird little tornadoes, the bank robbers Will Smith arrested break-out of jail and for some reason think they can attack Smith's character because they realize he is slowly getting mortal, although they apparently don't know why, they just want to kill him and notice he can be hurt (due to his spending more time around Theron). Eventually Smith solves all these problems by simply...getting some distance from Theron after barely being able to fight the bank-robbers which lets his and her powers come back, so he goes to New York City in order to keep them both safe.
What the fuck is this film? I'll tell you what it is, a mess with a really good movie buried in their somewhere if we just carefully take the first 45 minutes or so, build off of that and slice everything else away with magical immortal, weather powers, or that other shit. There are some incredibly smart ideas buried in here that illustrated so many other good directions the movie could have gone. For example...

1. The movie follows Hancock as he deals with suddenly being liked and how he struggles to adjust to celebrity life at fancy dinners or shows while also fighting crime. It would be a bit of a meta-commentary on the idolization of celebrities through the metaphor of a super-hero.

2. Hancock gains fame, but then blows it, becomes a loser again, and the movie is more of the comedy it was advertised as of a lovable loser who has powers getting up to shenanigans. It wouldn't be that deep, but it would at least be funny.

3. The movie builds-up one of the bank robbers named Kenneth, "Red," Parker Jr. (played by Eddie Marsan) who Hancock rips the arm off of to stop a bomb connected to a, "Dead man's switch," as a criminal mastermind, but we never really see that. Maybe have Red plot revenge when in prison by realizing he can't hurt Hancock but can hurt the people Hancock suddenly cares about (Bateman and an version of Theron without powers). They are kidnapped, Hancock is told he has to do evil stuff for Red lest they be killed and the rest of movie is about Hancock engaging in all kinds of villainous stuff  (like stealing, blowing stuff up, and whatever else would make for a cool montage) before he eventually finds a way to save his friends...but then has to deal with the fallout of his actions showing how even if he didn't want to be bad, he was, and now the city fears him knowing what he is capable of doing. You know, this also sets up a great idea for a sequel with Hancock as a hated and feared Superman-type of character and Red Parker as a Lex Luthor-styled baddie of sorts.

These are just three ideas I thought of off the top of my own head and all three are a Hell of a lot better than the movie we got. Still, there is a good movie somewhere in, "Hancock," especially in those first 30-45 minutes before it turns into a confusing mess. Sometimes there is nothing more disappointing than a movie that is 2 out of 5 stars which you see the potential to be so much more. At least in 2008 when Hancock was released another super-hero movie came out as well which was much better and happened to kick off the biggest cinematic franchise ever. Yes, I'm talking about, "Iron Man." Thankfully those movies didn't introduce immortal Gods until it made sense with, "Thor."
Posted by David Charles Bitterbaum at 2:37 PM