Film Friday: Reflecting on a Weirdly Deep Comment on Societal Constructions of Sexuality in the Film, "The Wedding Ringer." 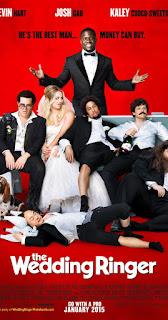 There was a film that came out not too long ago called, "The Wedding Ringer," where a man named Doug (played by Josh Gad) hires Kevin Hart (Jimmy) to be his best man due to the fact he lacks any particularly good guy friends. It's a pretty dumb movie full of clichés, stereotypes, and some admittedly funny moments in between the duller bits. However, despite the film spending the majority of its time playing-up the usual stereotypes or engaging in gross-out gags it has one ingeniously progressive element that took me completely by surprise and makes the film stand-out in my mind for that reason alone. That element is the wedding-planner character of Edmundo, played by Ignacio Serricchio.

You see, whilst Doug has been planning his wedding an outrageously over-the-top wedding planner who ticks every possible box of, "Gay cliché," has been assisting him--even going so far as to put Doug in touch with Jimmy and his best-man services. At one point in the movie Doug is freaking-out about the wedding and in order to calm him down and see a lot of weddings are just pomp and circumstance Jimmy takes Doug to see someone. They arrive at the house of Edmundo, who suddenly has lost the nice outfits and, "Gay voice," instead answering the door in a dirty shirt and chugging some beer. It is revealed that, "Edmundo," is basically just a character created by Eddie Sanchez (known to his friends as, "Dirty Eddie Sanchez,") because he realized he needed to, "Flame it up," to get a job as a wedding planner. So far pretty dumb and moderately offensive, yes? Well then something ingenious happens.

Doug and Jimmy sit with Eddie in his living room while he lights up a bong and a sexy woman comes by, Doug asks, "Is that your girl?" and Eddie responds how that is actually his sister. Then a barely clothed and muscular man walks into the room and Eddie says, "That's my 'girl.'" Yes, Eddie is in fact gay, but realized that even if he happens to be gay, he doesn't fit the societal perception of a gay man who plans weddings, and therefore has to act like a flamboyant and exaggerated concept of a homosexual man instead of being his true self--an alcoholic, weed-smoking slob who also is attracted to men. This short scene in the movie is so incredibly smart and loaded with commentary about our social-coding of, "Gay," and, "Straight," as well as, "Masculine," and, "Feminine," it is astounding to see it pop-up in an otherwise mostly unremarkable movie about a loner who hires another loner to be his best man and they end up becoming friends (I would say, "Spoiler alert," but even the previews made it obvious that's what happens). Here is the clip where all is revealed about Edmundo/Eddie:

It is funny to think that a silly comedy like, "The Wedding Ringer," manages to inadvertently make such a complex statement about social perceptions and tell some good jokes in the process. The majority of the movie may be standard silly fare, but this stroke of brilliance in the film has stuck with me and I felt deserved some discussion in a, "Film Friday," post.
Posted by David Charles Bitterbaum at 1:26 PM