The 2nd Season of, "Frisky Dingo," in 2007 Uncomfortably Predicted What Donald Trump's Campaign for the Presidency Would Be Like 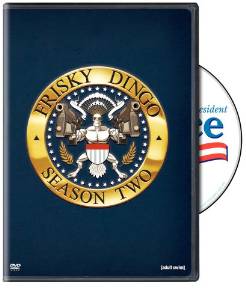 Back in 2007 there was a cartoon made by the people who later created, "Archer," and went on to immense success. Before, "Archer," however they made, "Sealab 2021," and then two seasons of the show, "Frisky Dingo." In the 2nd season of, "Frisky Dingo," two people run for President: A super-villain posing as a good guy and a dumb-ass billionaire. They are both basically represented now in 2016 in the form of one person--Donald Trump. At one point a character suddenly finds religion (ring a bell?), corporations play an uncomfortable role in it all, and the whole thing is a shit-show.
While the first season of, "Frisky Dingo," features the super-villain (Killface) facing off against a crappy hero (the billionaire named Xander Crews) in the 2nd season Killface accidentally cures global warming when in his effort to push the Earth into the Sun it actually moves away three feet. This results in Killface taking advantage of an easily-fooled country and running for President. Then Xander Crews runs as well because he's a rich guy who wants to be taken seriously after everyone mocking him. Hell, there even is a political ad where Killface stands at the border of Mexico with a wall talking about reducing immigration. Yeah, pretty strange.
About 3/4th of the way through the season they quit running for President and the show goes back to its hero-and-villain shenanigans but before that it follows a faux-documentary style and discusses politics. Much of the cartoon is just silly jokes but those ominous moments about a horrific person trying to be President are echoed by this awful man named Donald Trump. An old cartoon that just wanted to be absurd and funny really predicted some things uncomfortably well, and that in and of itself is terrifying.
Posted by David Charles Bitterbaum at 1:49 PM