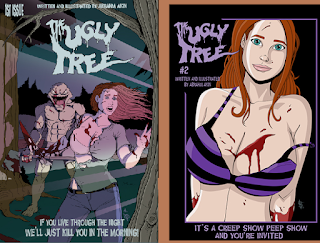 I first came across, "The Ugly Tree," thanks to an article on Bleeding Cool. Written and drawn by Abrahm Akin, I thought it looked like a fun comic with its mixture of humor and homage to 1980's-styled slasher films--of which I'm a fan. I reached out to Akin about purchasing the first two issues so that I could review them and after buying the comics they were shipped to me with good speed and I had them at my house ready to be read and enjoyed! Having read the comics I can now offer my thoughts...

Review/Thoughts
The first and second issue of, "The Ugly Tree," are good fun. The intention is without a doubt to riff on those aforementioned 1980's horror movies, but while also of course telling a unique tale. Not too much time is spent explaining the past, but something awful occurred that released monsters into the town who now alternate between doing inoffensive things like hanging out and getting drunk to committing horrible bloody atrocities. As those old slasher-flicks were loaded with nudity and sex the comic discusses that too, with the monsters quite aware of their own desire to see human flesh, or to take advantage of others horniness so as to lure them to doom. Seriously, it ain't an old-school horror story without someone's desire for sex leading to a hideous dismemberment.

Akin's artwork carries with it a cartoony-vibe that allows the humorous aspects of the comic to flow well and the bloody parts to be more funny than gross--this is a comic about horror, but itself isn't a horror comic so much as a commentary on them, after all. By being a bit of an examination of horror the comic can cleverly comment on how it is doing things that are cliche because that's the point, to write both a love-letter to horror films and poke some fun at them.
Were I to have some criticism for the comic it would be that while we get some good character development with one main character--Cherry (who is visiting her family for the Summer)--and some characterization with her younger sister, Peach, their brother just comes off as a bit of a jerk. Plus, if anything we maybe get a bit too much characterization with the monsters, as odd as that sounds. A part of me wouldn't have minded if they were kept a bit more mysterious with less of them shown, as telling us their names and having them crack jokes kind of humanizes them and makes them less intimidating or awful-seeming...at least until they then go and do something terrible! Still, those qualms aside I really liked, "The Ugly Tree," and can award it a very recommendable...
4.5 out of 5 stars.

In Closing
When it comes to the smaller-press comics you can always find all kinds of interesting works. "The Ugly Tree," has two great issues so far, and I look forward to seeing where Abrahm Akin takes things next!
Posted by David Charles Bitterbaum at 9:56 AM