James Bond #7 Has A Darkly-Hilarious Joke about Gun Control

The seventh issue of the, "James Bond," comic coming out from Dynamite marks the start of the 2nd arc titled, "Eidolon." As with the last arc, this one is written by Warren Ellis and apparently the concluding one for him before someone else takes over the book. In this issue Bond attempts to rescue British citizen who has had her cover blown out in Los Angeles where she's been surveying a Turkish agency in the States. During this rescue-process he gets into a firefight but then due to certain rules about guns in the UK (that the book has been covering), he has to dump his weapon before he heads back to the airport for a flight home. That results in this scene: 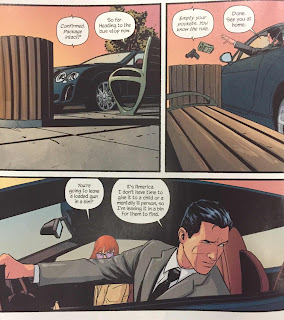 To recap, when questioned about throwing a loaded gun in a trash-can, Bond simply replies, "It's America. I don't have time to give it to a child or a mentally ill person, so I'm leaving it in a bin for them to find." When it comes to critiquing our Nation's policy on guns that is just, well, ouch. It burns because it is uncomfortably accurate about how easy it is for one to get their hands on a lethal weapon and when someone can buy an AR-15 in about seven minutes, the joke is as unfortunate as it is clever.

I'm not sure how much of that line is supposed to be coming from James Bond and how much from Warren Ellis, but whatever the case it is hilarious, albeit in a supremely depressing fashion.
Posted by David Charles Bitterbaum at 3:14 PM