Probably the Most Hated Person in the Comic-Industry Today... 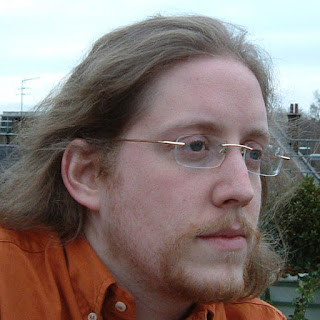 Rich Johnston is the man who founded Bleedingcool, located on web at www.bleedingcool.com should you be unfamiliar with the site. I am confused as to how you would not know of it, as it is the source for some of the hottest industry gossip and leaks. This is probably because Bleedingcool isn't really indebted to anyone in the comic's industry besides Avatar Press, who own the website but basically take a quite, "Hands-off," approach of letting Rich and his journalistic posse do what they please. Within the last 24 hours that has involved Rich basically pissing off everyone at Marvel.

Someone whom Rich referred to as a, "Bearded insider," with access to loads of info from Marvel gave him the holy grail of leaks, it seems. Essentially every one of Marvel's big upcoming announcements set to occur as we get closer to San Diego Comic-Con/Comic-Con International were put up on Bleedingcool in a flurry of spoilers--with some promo art added as well a bit later. Someone out there, "...either hates Marvel, loves Johnston, or both." That article I just linked to breaks-down some possible ways this could have all leaked as well, but whatever the case, Marvel is angry. Oh, and all the media partners who were going to capitalize on the big reveals in assorted exclusive stories are probably none-to-pleased as well. 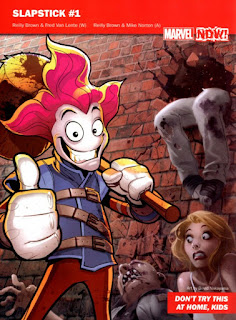 There will undoubtedly be a lot of fallout from this, possibly even lawsuits (I'm 100% sure if Marvel can find whomever leaked everything they will sue them into oblivion), but for now the wildest thing I've observed out of all this is that they are actually giving Slapstick his own ongoing comic. Yeah, not a mini-series, but a book that is tentatively an ongoing. Wrap your head around that. Oh, and I'm aware the character has been retooled to be different and darker since his first appearances, but still, Slapstick? I mean, I'll check it out for sure, it will undoubtedly be odd.
Posted by David Charles Bitterbaum at 12:46 PM