Today I went to the 2nd annual, "Mini Comic-Con," held by the Saint Louis Public Library system at their location on Olive Street in downtown Saint Louis. It was the 2nd year this smaller comic-convention was held and my first time attending. True to its name, the mini-con had a smaller assortment of guests and vendors, but that didn't  mean the attendance was miniature--quite a large crowd showed up!

There were a number of comic-makers in attendance from the publisher Lion Forge (whom I've spoken with and enjoyed the works of before), to a creator and her husband I met at a previous Project Comic-Con, Lindsay Hornsby and James Hornsby, and a very nice creator with a cool art-styel, Coyote G. Bynum. I bought some comics from Ms. Hornbsy (a cute comic about princess puppies I plan to review in the future) and a fun comic about a vicious robot from comic-maker Jeff Elden. 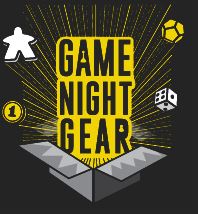 It wasn't just comics at the con however, the 501st Legion were there promoting, "Star Wars," cosplay as well as the Hand Painted Nerd AKA Ashley Dunning, who had a variety of neat ceramic stuff. I had the pleasure of meeting with, "Game Night Gear," who are a monthly subscription box (like some of the ones I've discussed before on the blog) that send out exciting board games, "Blind-box," style where you get to be surprised every month by what you receive!

I had a fun time checking-out the 2nd annual mini-con and want to thank librarian and comic-maker Christina, "Steenz," Stewart for organizing such a stellar mini-con! I had a wonderful time attending it and look forward to many other successful future ones!
Posted by David Charles Bitterbaum at 11:32 PM