Project: Comic-Con 2015 Reflections Part 1--Some of The Folk I Met

Yeah, That Was Awesome 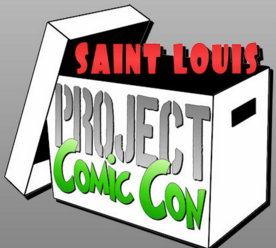 Project: Comic-Con wrapped Sunday--and then I was too busy to post about it until today because I just got married! If you follow its twitter feed you saw plenty of tweets I contributed to sending out as the social media coordinator for the show, and the pictures reflect all the cool people I met and the fun I had! By the end of convention my feet were killing me and I felt more exhausted than I had in some time, but I was also incredibly happy as it had been such a fun event!

I met many awesome creators and while I enjoyed speaking with everyone I thought I would describe in further detail the creators I had more in-depth conversations with, picked up cool stuff from (the swag I got will be the subject of the next post) or otherwise have sticking-out in my mind.

Some Delightful People
The day before the convention while assisting with set-up I met Alex De Campi and Carla Speed McNeil. It was fun to see both as they of course are collaborators on, "No Mercy," as well as other titles. I greatly enjoyed speaking with them before and during show, picking up a number of comics from them which I am excited to read. During the night before the show I also had a chance to speak with June Brigman and Trina Robbins. Both great creators, June is known for a number of titles including, "Power Pack," and Ms. Robbins was the first female ever to work on "Wonder Woman"  created Vampirella's famous outfit, and has done countless other amazing things. The night before the show I also ran into Jen Blake whom is always hilarious and eager to discuss her work on titles such as, "My Little Pony." Truly a fun night and that was before the show even began!

On the day of the convention before the show began and got busy I was able to chat with C. Spike Trotman and hear about all the awesome things coming out from the comic publisher she founded, Iron Circus Comics. Then, as the show kicked-off I had the opportunity to speak with Meredith Finch and discuss how she has greatly enjoyed writing "Wonder Woman" for DC Comics.

As the show proceeded I ran into Emily Warren who has a really fun art style and was featured on the local news! I also saw Sara Richard and complimented her work on "Jem" and other titles. I made it a point to say, "Hello," to Kenneth Rocafort because he is always super pleasant and I would consider myself a fan of his art-style. I also met Lindsay and James Hornsby and admired their cool comics about various subjects, picking up one about puppies. At a neighboring table was a man named Tom O'Brien and a lady named Allison with a variety of cool wares too!

The show approached lunchtime on the first day and at that point I had spoken with Matt Kindt and purchased a comic being sold by his daughter who had accompanied him to the convention so she could sell her own title about a llama. I also met René Barr and took advantage of her offer to sketch a trading-card size image of whatever I wanted and requested she make me a Moon Knight (I picked it up on day two and it is gorgeous, as you'll see in my later post).

At this point in the convention I attended the cosplay fashion show and was impressed by all the outfits on display from a wide range of ages and fandoms. It was really cool.

As the afternoon approached I spoke with Jeff Balke, a colorist who does something unique in that you can bring him any sort of sketch and he will hand-color it for you--thereby taking a cool black-and-white image you may have had created and turning it into something even more unique and one-of-a-kind. I also said, "Hi!" to Joëlle Jones and complimented her stellar work on, "Lady Killer." I was excited to hear from her that more stories are on the way! I also went over to the table of, "Rori!" and told her how I enjoy her, "Tiny Pink Robots," comic.

It was then 5PM and the show as done for the day. I was utterly exhausted and unable to stay for the after-party, instead going home and passing out, waking up to eat a late dinner, and then going back to sleep.

Day 2 began the next morning and I kicked it off saying hello to Rick Burchett again (I had greeted him briefly the day before) and discussing his enjoyment of creating a web comic (that then gets collected in print) in the form of, "Lady Sabre," with writer Greg Rucka. Following chatting with Mr. Burchett I walked over to Jim Mahfood's table and told him how much I had enjoyed the recent, "Miami Vice: Remix," comic that he illustrated and Joe Casey wrote.

Then, I browsed around some more and stepped out for lunch. It was pretty tasty but I was annoyed when I asked if the bison burger was cooked separately from the beef as I have an allergy and was told by the server they were, "Basically the same," so I can't just be allergic to just one. My past allergy test results and what happens to my stomach anytime I eat beef would disagree, but whatever. I just got the herb-stuffed chicken instead.

Afternoon arrived and I really enjoyed speaking with Nicole Boose as it is interesting to hear about the craft of comics from an editor's perspective. I also was able to chat with Faith Erin Hicks as the show was winding down and tell her how snazzy her prequel-comic for, "The Last of Us," looked thanks to her fantastic artwork. I also had the chance to greet Lorenzo Lizana and chat about his work with Lion Forge comics (a company which I've discussed on the blog before).

Overall, I had quite a stellar time and while I enjoyed this year's Wizard World STL, I really appreciated the comic-focus and more relaxed feel of Project: Comic-Con. At this show it is so much easier to be able to meet and talk with creators as opposed to some of the gigantic conventions where you wait in a long line just to say, "Hello," get an expensive autograph from a movie star, and shuffle along.

Project: Comic-Con was just awesome and I'm so happy I was able to help with the social media, set-up, taking down booths, and otherwise contribute to such a fun time. Keep an eye out for my 2nd post on the convention where I discuss a bunch of the cool things I purchased!