It's Gonna Be a Great Weekend

As attentive readers will remember, I announced back in June that I'm assisting Project: Comic-Con with their social media. The event is now to occur this weekend and I'm really excited! Happening from 10AM-5PM on Saturday with additional later-activities such as a documentary screening and after-party, as well as on Sunday from 10AM-4PM, this is bound to be a great time! I've been posting creator spotlights on PCC's Facebook and when the event occurs you can expect plenty of tweets.

I will of course have write-ups on my experience at the convention, with past Project: Comic-Con shows always being great and my expecting this one to rock too (hence my being happy to serve in a volunteer position)! There is a great number of guests, and unlike other conventions this one is comic-focused, not so much bringing in random movie or T.V. stars (although I've enjoyed those kinds of conventions too). Also, the price isn't absurd, which is something conventions sometimes seem to suffer from. 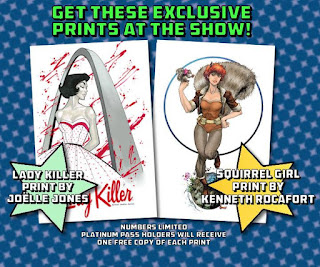 I'm super-pumped for this weekend and would encourage you to attend if you live in the area. I've enjoyed many conventions but always have found PCC extra exciting thanks to its being sizable enough to get some great guests, and vendors but not feeling absurdly packed.

Anways, here are some helpful links:

Here is the guest list for Project: Comic-Con, which this year has a lot of great female creators!

You can buy tickets to Project: Comic-Con at this link.

The official twitter of Project: Comic-Con is at this link, expect it to be very busy this Saturday and Sunday!
Posted by David Charles Bitterbaum at 1:37 PM