What Do You Call a Joke Taken Too Far? The Trump Campaign for the Presidency/Republican Desperation 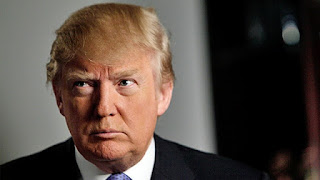 Donald Trump is a blowhard moron who cares more about the Trump brand than actually being President. I and many others seem to realize this, but he's still actually winning in terms of the Republican Nomination. Yes, it has been pointed out by the media his poll numbers are dropping, but he's still number one among GOP contenders. This is terrifying because the idea of Trump actually becoming President is like a joke taken too far.

It is interesting to say its a bad jokes, because two media sources I enjoy made a similar comment. Pete Davidson on Saturday Night Live says it well with his statement that, "America needs to stop doing things 'cause its funny," as shown in this clip here.
Davidson has a solid point, and it is one that, "South Park" riffed on in its 2nd episode of its new season with a Donald Trump-looking dictator taking over as Prime Minister and making that country so awful that citizens flood into the U.S.--because when the time came to actually be serious about their election it was too late. This results in my hoping it isn't too late now because it's depressing to think so many people seriously support Trump and that others (myself included) wrote him off as a little more than an absurd fluke with little chance of gaining traction...but now here we are.

I suppose some of this desperation comes from how the Republican party is eating itself alive with moderates either being forced-out or abandoning ship while extremist branches cause schisms-within-schisms to the point where we've got Tea Parties, Freedom Parties, and who-knows-what-else. At this point it is looking like it either has to be Trump or a former neurosurgeon who despite being extremely intelligent also believes in whacked-out conspiracy theories, claims evolution is a concept created by Satan, and thinks kindergarten teachers should carry guns around the classroom--because kids never accidentally get their hands on a gun and cause an accident (he said sarcastically).
Between Trump, Carson, or anyone else who can manage to rise above the noise and gain a nomination as the GOP candidate one thing has become abundantly clear, the Republican Party is desperate for anyone who can theoretically beat Hilary Clinton (or should that campaign fall apart for some reason, Bernie Sanders, although at this point I'm thinking it is more likely he could possibly get a VP nod). It really has become one big joke taken too far to think Trump could be President, but I have to be honest and admit that all these people acting like it's a reasonable idea have me terrified.

I suppose time will tell what happens next. I just hope all the jokes about a world where Trump is President of the United States and it becomes a desolate wasteland don't turn out to be prophetic.
Posted by David Charles Bitterbaum at 11:36 PM