We Begin
Wizard World Saint Louis 2015 was fun and I enjoyed it. I just want to say that now because in this article I am going to say what I liked, but will also be discussing the things that were bad, or downright "ugly" in a sense of the word. This is meant as constructive criticism, but I've always prided myself on being brutally honest, so if feelings get hurt...well, they get hurt.

The Good
Inclusivity and diversity 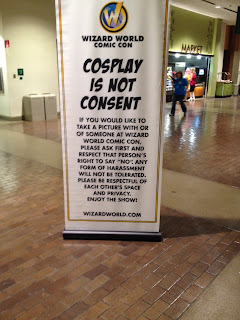 There were signs that emphasized how cosplay is not consent, famous transgender cosplayer Alexa Heart was present and did a panel about, "Coming Out Cosplay," and the speed-dating panel had an LGBT session. All of these elements illustrate that Wizard clearly is dedicated to inclusivity and diversity, something which in this age of people getting accused of being "Fake geek girls" or "Social justice warriors" is much appreciated with there seeming to be an apparent backlash against the diversification of nerd culture (whatever that means).

It wasn't too crowded!
Sometimes conventions can feel like a sardine tin, that wasn't an issue this year, with plenty of space for walking about. Although, as I mention below, this can bring issues in a different way.

The kick-off was really fun
The Thursday-night event for people who paid a ticket or were press was good fun. Christian Kane had a great voice, the Hard Rock Cafe staff was working hard to get everyone their food and drinks, and basically it ran like a well-oiled machine.

A Variety of things and people to see
WW wasn't just about comics, which some might say is bad, but I'm cool with a comic convention having a variety of stuff. I'm happy that they've got a guy who makes incredible designs with pancakes, panels about ancient martial arts with swords, and a booth with actual live falcons and owls. That's just snazzy, I would argue. Also, they had the original Herbie himself. That's right, the famous love bug from the television show we all loved (and a movie we pretend didn't happen) was at WW, how cool is that if you ever happened to enjoy the show?

Everyone was really nice
From the employees, to the volunteers, celebrities, and vendors, everybody was nice and courteous. Sure, some people in artist alley were a bit awkward, but few people are born salesmen/saleswomen and it can feel strange to promote yourself and your work. I did not encounter one comic-maker, famous person, or vendor who made me think, "What a jerk!" with me in fact often having the opposite feeling of, "Wow, they were really cool."

Some incredible cosplay
There was a myraid of cosplay on display, from your basic, "Hey, I put on a wig," all the way to, "Check out my gigantic Frankenstein's Monster that lights-up and has an actual heartbeat. No, I am not joking about that: 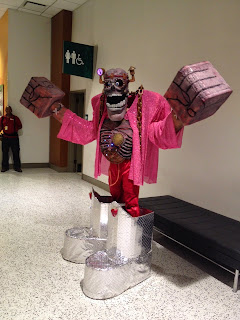 One wonderful thing about conventions is they often truly do have some fantastic costumes, and getting to see all that makes everything worthwhile.

Moon Knight was there!
Jumping off of my comment about cosplay, arguably my favorite hero, Moon Knight, was there. I of course took a photo and felt immense joy seeing someone else who adored the character enough to dress-up as him. Observe: 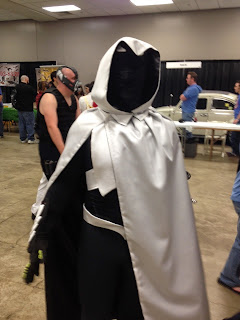 Yeah, that made me happy. 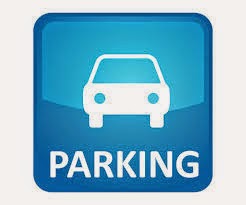 Overpriced food and parking
This is to be expected and not really Wizard World's fault. Still, it is always a pain to think that you spent half of your budget for the convention on simply having a place to park and a four-dollar bottle of soda that would run you $1.25 at the gas station.

No cool booklet
Last year Wizard World had an incredible program. It was a big booklet full of maps, panel-times, guest bios, and just general fun-stuff. This year they gave out a big sheet that on one side was a map and on the other listed the programming dates and times (although those weren't always accurate as I discuss below). I'm not overly upset there wasn't a cool program, as I understand that can be pricey. Still, I did miss it and have a slight feeling of, "Oh, so Saint Louis isn't worth a fancy booklet?"

The Ugly
It really wasn't too crowed...with vendors or artists
I like it when I have space to walk and breathe at a convention. That said, it is weird when it is a Saturday afternoon and things feel relatively...quiet. Sure, some celebrities with big followings had a bunch of people at their booth, and I visited well-attended panels, but the showroom floor could at times feel downright barren, with multiple panelists and celebrities asking me, "Do you know why attendance feels light?" The best reasoning I had was that having the convention on Memorial Day was probably not a good choice, as many STL residents would be out of town visiting family or doing weekend barbecues. Another big help with attendance is having celebrities that draw a crowd, and well...
Not that many "names"
Look, I'm not someone obsessed with celebrities. The day I pay 60 bucks for someone famous to simply jot their name on a photo is the day I clearly have given up on the life and joined, "The cult of celebrity." Now, if I paid 60 dollars and a comic artist made me a cool sketch or something, that is rad...but I ain't paying anything just to snap a selfie with you. That said, it can be fun for big-name celebrities to be at an event, and it can attract crowds so that things don't feel quite as empty as this year at times was.

Plus, it didn't help that up to during the week of the convention I would see certain people being added at the last minute. For example, do you like Greg Horn? Did you know he was at this Wizard World? If you hadn't been checking the website regularly you maybe were unaware as he seemed to have been added just a number of days before the convention (not weeks, days).

Some panels were a mess
I went to see a panel/event at the show stage that didn't happen. There was no announcement, nobody came around to say it had been cancelled, just....nada. I sat there for a good 15 minutes after when it should have started, and left when other folk who were waiting got tired of lounging about too. As I've said, there were plenty of wonderful and fascinating panels, but I witnessed and heard from multiple panelists how tons of things were in flux, with the schedule not being solidified till the last minute, and there being panels that still had a somewhat "TBA" list of presenters and moderators when the convention started. Perhaps having things in order before the actual day of a panel would be a good choice.

The after-party
I had been warned about the after-party. I was told that it basically consisted of waiting in a line to get an over-priced drink, then standing in a line sipping it and making idle conversation with whomever you ended up standing next to. Despite all the forewarning, I decided to check it out due to  my sense of morbid curiosity. I had also been informed it didn't really "get going" until 9:00PM but I went up at the beginning (8:00 PM) just to scope things out. More than half the room was sectioned off for VIP guests/celebrities which is understandable as I imagine they don't want to be assaulted by fans, but I don't think they really needed all that space. Then, I was feeling thirsty but didn't want to pay $2.50 for 75 cents worth of soda in a little cup, so I asked for a cup of water. I was informed that they could not give me some water from the soda gun, but I was in fact required to pay for a bottle of water to be poured into the glass. Upon protesting this it was pointed out I could always get water from a nearby water fountain. Not. Helpful.

So yeah, I admittedly left before the party got into much of a swing, but am pretty sure I didn't miss much. One positive thing to come out of that was I got a good picture of the quiet-for-the-night showroom floor from above. Here it is: 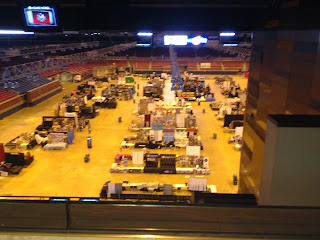 That was cool, at least.

The price
I was able to attend for free as press, and for that I am extremely grateful, as my budget definitely could not take paying almost $80 for a pass to the entire show, or various amounts near $50 for just a single day. I've heard of vendors or celebrities being displeased with how much money they make in the past, but if a show costs a fair amount, and cosplayers are spending money on their costume, that really doesn't leave much in the way of funds for a person to spend on comics, toys, etc. I know that the cost helps pay for guests, compared to some conventions that is a steal, and if you have a lot of disposable income the price is trivial--I get it, it's subjective. Still, compared to other conventions that is pretty steep, and considering how things were smaller this year with less "name" guests, I would sometimes hear grumbling about the cost from convention-goers.

We End
I had fun at Wizard World Saint Louis 2015. There were clearly positives, negatives, and severe negatives. Still, I would happily go again and have more fun next year, without a moment's hesitation. While WW may have flaws, it still is just always a pleasure to attend a convention and enjoy the feeling of being around people with similar interests, even if some things were a pain.
Posted by David Charles Bitterbaum at 10:26 PM