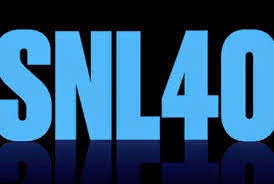 Saturday Night Live just finished its 40th year/season. It was a decent one, but as anyone would say, not as good as it used to be--with everyone's "Used to be," meaning anything from the 1970's to the early 2000's depending on when you most enjoyed the show. The problem with SNL is it arguably was never as good as we remember, existing as an impossible memory of our childhood and teenage years, when watching the show seemed naughty, because they swore and made sex jokes. The thing is, our childhood was never as great as we recall, and everyone thinks of different eras of SNL being the "true" good years....besides the abomination that existed when boss-of-the-show Lorne Michaels left temporarily in the 1980's, but we don't talk about that. However, despite so much of SNL being subjective, I think it can actually be said, and be argued to be factual, these more recent seasons ain't been that great.

Tough Love
I'm going to give SNL some tough love. I really do adore the program, and religiously tune-in live or if I miss it for some obligation watch my DVR as soon as the next day. That said, SNL has been kind of milquetoast lately. Bland. Passable. Whatever synonym you have for, "Mild," when meant as a criticism. SNL might never have been pure fiery jokes, or edgy satire, but it seems in election years the show does occasionally make a sharp statement, but less-and-less often now that programs such as "The Daily Show," put what used to be the stand-out segment--weekend update--to shame. SNL has become a show that rarely, "Goes there," and challenges the viewer. The strongest emotion it usually brings out is, "Oh, that's kind of funny." That makes those rare moments the show actually goes for the jugular all the more refreshing. The thing is, those moments happening seems to often ride on there being a good host.

The Importance of Being Earnest...When Hosting 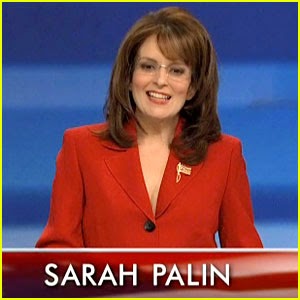 SNL had a Godsend in the form of Sarah Palin and Tin Fey's eerily spot-on impression. We still talk about it today because of how stellar it was. A strong cast is a key part of the show, as she, Kristen Wiig, Darrell Hammond, Will Ferrel, etc. prove. What the show often rises and falls by however is the individual (sometimes individuals) whom is hosting. A sports athlete will usually mean a drag of an episode (with a few key exceptions such as Charles Barkley, whose willingness to mock himself has resulted in some strong showings), but a talented actor can provide some good times. We are all royally sick of the musical monologue however (Note: Actual musicians who host get a pass if they sing in their monologue), but besides it there are only two other go-to ways to handle that part of the show. Namely, you can have the "audience" ask the host questions, or on those magical times you get someone who can do stand-up, we get a short routine. That led to something amazing in the season finale of SNL's 40th year on Saturday--namely, it actually "Went there" and proved it can be relevant. 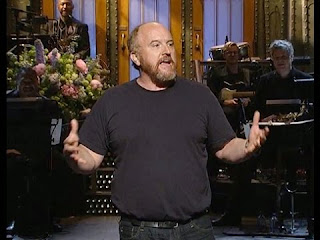 Louis C.K. has now hosted three times in three seasons. He may struggle in some of the sillier sketches but his monologues--of course delivered as stand-up routines--are among some of the best on the show, with only other stand-up talents being as impressive (Chris Rock's recent hosting gig where he riffed about the new "Freedom Tower" was superbly done). In Louis' monologue on Saturday he started off in a relatively tame manner, discussing how he could be, "Mildly racist," but then eventually moved into the territory of talking about child predators. He discussed how the fact they could face such severe consequences but still do it must mean it is really enjoyable to them, and he cannot fathom ever loving something so much as they love molestation. It was admittedly crass and inappropriate, it caused controversy, and it was more amusing for shock value than content, but damn am I glad SNL let him do it for no other reason than for a brief moment this season the show, as I've said I want to see it do, "Went there." It did what entertainment is sometimes supposed to do to us--make us uncomfortable, make us a little angry, and get us thinking. It helped SNL stop being toothless for a moment, and give us a bit of bite. The only other time I felt that nibble was maybe during the big special that happened this year, where when some of the older cast appeared along with past hosts we got some pointed joke (I loved the slam against Fox news for being a network of pretty blondes, "Reading the fake news," that hit hard).

I Want to Feel!
SNL coasts along too often with jokes that are a bit funny, but don't challenge the audience. Those rare occasions when the studio gasps are like mana-from-heaven to me, someone who likes their humor a little sharp humor now and then. Some of my favorite skits are by no means topical or full of satire (Dick in a Box makes me laugh hysterically to this day), but getting some of that in the show is always appreciated. I just want to feel something, be it shock that they actually made a controversial statement, or even some anger if they do something I disagree with. Still, perhaps taking things steady has helped SNL last as long as it has. Through being a little agreeable and not always rocking-the-boat SNL has survived 40 years, that's an amazing feat in the arena of television. I suppose the issue isn't how SNL has been, but what it will be. After this somewhat-shaky season I imagine a chunk of the current cast will be let go, and a sizable assortment of new talent will pop-up too. Depending on how we all feel at the end of the 41st season, perhaps I'll be writing about an SNL renaissance, the worst season ever (again, those 1980's ones don't count), or something enjoyable but unremarkable, kind of like what we just got for the 40th year.
3 out of 5 stars for the overall season, including the special.
Posted by David Charles Bitterbaum at 9:04 PM