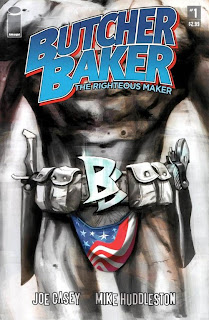 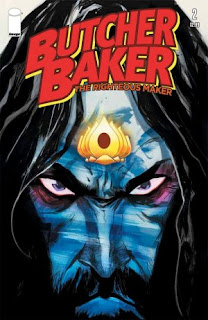 Butcher Baker The Righteous Maker #1-2
This is a strange comic. Sort of a parody of over-the-top super-patriotic comics and also a tale of what happens to heroes when they older than we are used to. It looks great and is generally entertaining, just really odd.

Butcher Baker is a hero around the middle of his life, spending his days drinking and sleeping with women when the government comes calling asking him to blow up a facility holding all the super-villains he had helped lock up because taxpayers are sick of funding nice treatment for evil-doers. Butcher Baker does so, but not everyone is killed and the surviving villains plot revenge while a policeman Baker has upset also wants to give Baker a piece of his mind. I've basically summed up the two issues but a lot more happens, namely a bunch of explosions and jokes. Yeah, if you take this at face value it is just a silly comic, but because this is Joe Casey writing this comic there is of course more to it and he is clearly doing a bit of a parody here. 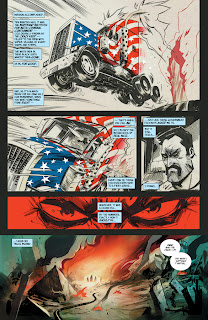 In between the cursing, silly jokes, naked women, and things blowing up there is a clever little comic in here, gently mocking super-hero comics by playing up the cliches of them to the maximum degree with a few twists thrown in such as our hero being past his prime and a bit disillusioned himself. I like this comic, and the multi-page rambling back-matter by Joe Casey is an interesting peek into his crazy mind. Overall this is pretty enjoyable even if it isn't yet amazing me.
3.5 out of 5 stars.
Posted by David Charles Bitterbaum at 8:30 PM