Actually Quite Good--Azrael: Angel In The Dark 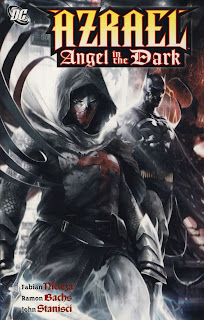 Azrael: Angel: In The Dark
The first volume of the ongoing Azrael series collected in trade paperback form. It is much better than you maybe would expect, and is really quite interesting, tackling complex subjects pretty tastefully and of course working in some good action bits.

Michael Lane was the third Batman of the evil future Batmen during Grant Morrison's run on the main title. He later became Azrael, so that's a fun fact for you. You don't really need to know that, you just need to be aware that some of his family was killed in some sort of satanic ritual, he's an ex-cop, he wears a suit of armor for an organization that wants him to administer justice, and he goes around righting wrongs. Yeah, there is a lot of continuity you could know, but you don't really need to in order to enjoy the stories because Fabian Nicieza has always been a good writer. 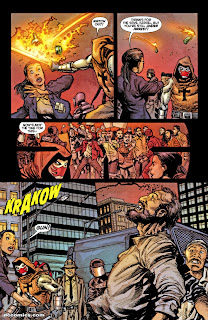 In the course of this first volume Azrael links up with some old military buddies--although it isn't all good news with one having gone a bit bonkers, he solves some other cases, and in my favorite story he and Ragman face-off when tensions between the Palestinian and Jewish populations start to rise and a potential terrorist could be found in Gotham. The end of the story shows a moral murkiness that is facing the whole Israel-Palestine issue and I liked that it wasn't some annoying, "Yah Israel, America's best friend," piece, or, "Oh Palestine, its such a blameless victim," type of story. The last story also furthers the overall plot of the series that kind of ended with issue 18 seeing as how this comic was cancelled, but oh well. 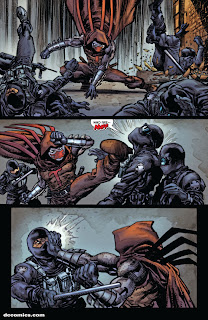 This was a really fun read, and it is kind of sad that this series was cancelled, but then again Azrael was never the most popular character--regardless of who was using the name. You really might enjoy reading this so why not take a chance on something new and pick it up?
4 out of 5 stars.
Azrael: Angel in the Dark

should you feel like experimenting.
Posted by David Charles Bitterbaum at 10:00 AM