A Cool Mixture of Horror and Noir--Fall Of the Wolfmen 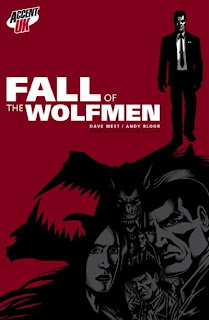 Fall Of The Wolfmen
Published by the independent comics company Accent UK (also known for their snazzy anthologies on various topics, such as robots or westerns, that they do annually), Fall Of The Wolfmen is actually a sequel to the first graphic novel, The Wolfmen. You don't absolutely need to have read the first to understand this, but it is a good read so I'd recommend it--basically our protagonist who worked with some crooks that are also secretly werewolves in the first book is now out to kill them in this new book whilst having becoming a werewolf himself at the end of the last book. How is this volume though? Well, as an odd mixture of noir and horror it goes down pretty smoothly.

Our so-called hero (because he isn't really heroic) Jack Grey is out for blood against the Wolfmen, and this means we get a lot of well drawn fight scenes in-between some hard-boiled narration that sets a dark mood. The graphic novel is in black-and-white but don't think that means it is cheap or anything--this is printed on high-quality paper and is nice and glossy, it's just black and white because the lack of color helps the darkness and use of shadow really come out. Using black and white for this sort of comic with its creepy and criminal tone was definitely the right choice. The story has various flashbacks and subplots with Jack Grey's girlfriend that add a likeable character to the story because if it were just about Grey the reader wouldn't be able to really identify with anyone--making the use of someone who isn't a cold-blooded killer a good writing choice. Plus, as I mentioned, the drawing, use of shadows, and black and white is really well done. 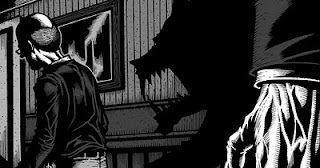 If I had some complaints about the story, it would be that sometimes the narration is a bit unclear about whether it is supposed to be more of a first-person or third-person narration, and at times feels a bit unnecessary--as if the story could move along just fine without it. Other times it is useful though, so its a bit of a wash when it comes to that aspect. Also, a lot of the comic does spend time focusing on Jack Grey's girlfriend and not enough on some new players in the mob scene, such as these intriguing fellows known as, "The Ghosts." I appreciate reading about the lady's plight and all, but I wouldn't have minded a little less of her crying in frustration for some reason or the other and a little more of the dapper-yet-deadly ghosts. As for complaints about the art, I have none, it suits the story perfectly, being not too realistic and not too exaggerated. 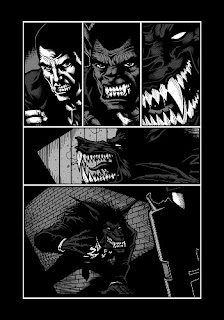 Fall Of The Wolfmen is a graphic novel that has a quite good crime-horror tale contained within its pages, and great art that makes up for any complaints I have about the story. I look forward to future volumes as Accent UK has said somewhere on their site or blog a Wolfmen 3 is in the works--and you should check the site out anyways as I almost always enjoy the stuff they put out. I'd recommend picking up this book and if you enjoy it trying out the first one too to get a bit of back-story, or doing it the other way around--getting the first book before the second, whatever floats your metaphorical boat.
4 out of 5 stars.
Posted by David Charles Bitterbaum at 3:00 PM