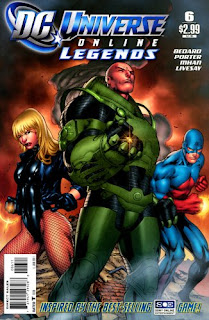 DC Universe Online Legends #3-6
This has been an interesting series so far. Tying into the video game for the PS3 and PC this bi-weekly series has been generally fun so far. Jumping between the present and future (or as would make more sense, past and present, but whatever) it has been about Lex Luthor and a rag-tag group of survivors trying to fight against the alien Brainiac who has taken over the world, while in the past/present...well, that part is the kind of dull segment.


Are the Justice League so dumb that when fleeing their outer-space base they would forget a member (Aqua Man) and have to do a last-minute rescue? This comic supposes they would, showing how the segments that take place in the past of this comic tend to be sort of lame compared to the much more interesting bits in the future where Lex Luthor and crew wear Sinestro rings and fight robots. There is one cool bit in the past where we see why ol' Lex has that electronic eye in the future (ouch) but otherwise I could do without the dull past-bits. Wow, Superman misses his wife Lois Lane who was abducted, boo-hoo. 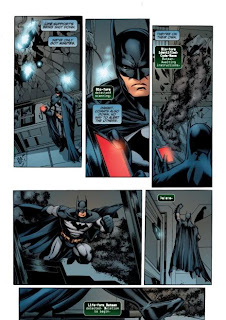 Some have said the art is awful, but I haven't thought it to be too terrible. I haven't been amazed, but my eyes haven't been insulted. In other words, the art is serviceable and not something I am overly worried with. It's more the disjointed nature of the past and present, with it not quite being clear how they connect yet--other than how Brainiac is causing trouble for our heroes in both timelines. The comic could have worked if you just started in the past and worked to the future over the series instead of doing this split-up method where you show half in the past and half in the future. As I said though, I've enjoyed the parts in the future, and I especially like when we see into Luthor's mind, such as when he admits he was wrong for being so obsessed with Superman: 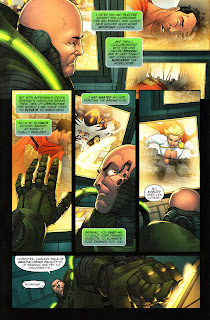 Overall this has been a pretty good series so far, although the end of issue six worries me with its hinting at time-travel with the big reveal of a certain hero still being alive. It's just, that time-travel can be a bit played out, but I think things might still work out pretty well. As I've said before out this series, if you want something DC related but don't want to have to be in-sync with all the continuity of the comics this is a good series to be reading. It's fun, has some interesting moments, and I'm intrigued to see just where it goes.
3.5 out of 5 stars.
Posted by David Charles Bitterbaum at 10:00 AM