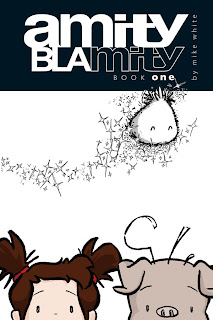 Amity Blamity Book One
Written by Mike White, this started life as a differently-named web-comic before becoming a black-and-white trade paperback about a young girl named Gretchen who doesn't speak, a pig named Chester, and grown man named Uncle Downey who lives like a pig (and is Gretchen's uncle)--and the Grandma pops up along with a small critter named Winston who is really off his rocker. It's a fun all-ages geared tale with just enough humor that appeals to us grown-ups that everyone could enjoy it.
Separated into various chapters, Gretchen, Chester, and Uncle Downey--along with Winston, engage in various interesting shenanigans such as sleep-walking (you can wake up a sleep-walker without worry, by the way, despite the comic saying you shouldn't), helping Uncle Downey with his moonshine operation, and generally cracking  very funny jokes that made me grin on multiple occasions. The book is very light-hearted and young children will love the physical-humor while us adults will get the more wordy-humor, with some jokes being surprisingly dark, such as the most twisted ones--when Chester comments on the ever-paranoid Winston having not been the same since eating some of Uncle Downey's brownies and watching, "that 9/11 documentary," or Downey remembering when he tortured Winston with a vacuum cleaner for fun--with the comic adding a hilarious disclaimer about how it doesn't endorse such things and you should hug your pets. Yeah, this comic has some cutesy stuff, but it also knows when to cut a little loose. 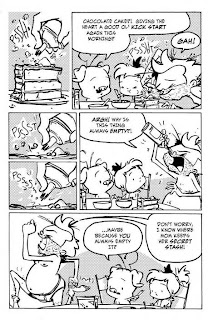 Mike White both writes and illustrates this book to much success, with a style that is fun and cute while not being overly syrupy-sweet. Throughout this first volume you really get a feel for each of the character's personalities and have a really good time getting to know them all. The only character we don't see much of is Grandma, and she comes off a bit bland, but I suppose you need someone to be the reasonable person among this crazy cast, so that is understandable. 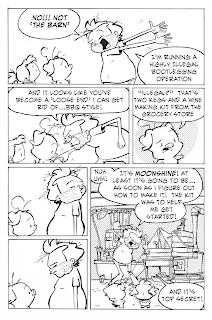 This was a fun read that I bought because it not only had fun humor that appeals to the young'uns, but it also is quite funny if you're a grown person. I'd recommend it.
4 out of 5 stars.
Posted by David Charles Bitterbaum at 9:49 PM