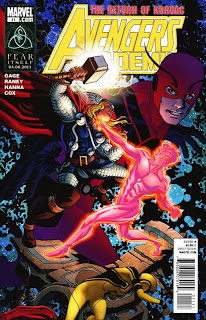 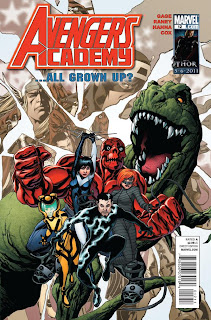 Avengers Academy #11-12
A fun coupling of comics where some weird energy-guy known as Korvac attacks the Avengers Academy and his ex-wife make the kids adult-versions of themselves with their current teen-minds. It's pretty fun.

Korvac is a super powerful man, Carina is his wife that doesn't want to be with him anymore, this leads to some big ol' fighting between Korvac and all the Avengers who respond to a distress signal and the kids discussing the potential the future holds with Carina. Then, she makes them adult versions of themselves and they totally whup Korvac while also experiencing some character growth all-around and having a good emotional moment at the end between two characters that did genuinely make me go, "Aw." Yeah, it's pretty good, but I just don't love it. 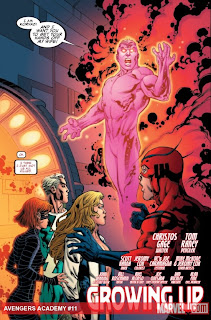 Maybe issue #11 had a bit too much talking, issue #12 had a little too much action, or I just wasn't invested in the conflict because I know little about this Korvac fellow. Whatever the case, as I said, I had fun, but I didn't outright love these comics as I have some issues. This series tends to always be solid, and I do love the characters--which is a testament to Chirstos Gage being a really good writer, so I did have fun (which I keep repeating to make clear). 2/3 of the time I enjoy the comic and 1/3 of the time I love it, so there is a reason I continue to like reading it and would recommend you do too--I am definitely not trying to damn with faint praise, this is a comic I really like. 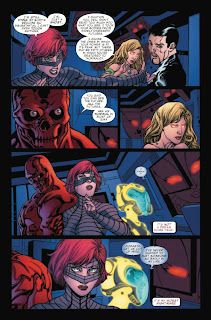 This is a really good series that I would recommend to others even if I don't love every issue--because I do always at least like them. Gage is a great writer and I know he will be doing some sweet stuff with this series.
3.5 out of 5 stars (for both issues).