Batman: Gates of Gotham #1
A new Batman-related mini-series involving the history of Gotham city along with the Wayne families and other famous individuals who helped build Gotham up into the crime-ridden place it is today. The driving issue is a mystery, and if that mystery weren't interesting this would be a miserable comic, but my curiousity is piqued, so that mission was accomplished. How was the overall writing and art though? You know the drill by now (and if you don't, click the cut)

Scott Snyder is doing a dynamite job over on Detective Comics, and this comic involves both various Bat-characters and what seems to be a dark secret in the city of Gotham, so why does the art look almost like it is a scene from an animated cartoon, and why is it so snazzy that I don't mind? Really, this Kyle Higgins fellow turns in some stuff that just looks great, as if it were individual cells from some Batman television series, and this makes the action scenes flow quite well as you can imagine. So, you've got some great writing and some great art, but just what is the comic about? Well, I think it is something to do with bridges and a secret history. Yeah. 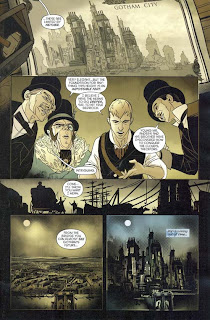 Let me explain things a bit, in this comic three old bridges in Gotham blow up and they each have a long historical background tying them to some of Gotham's original families as we learn during the comic. This leads to the mystery of why someone is targeting these bridges and what their goal is, along with a fun little twist at the end of the issue that brings in a character some hate and others love but whom it does at least make sense to use (I'm indifferent about the character, so whatever works). Oh, and the Penguin shows up with Higgins drawing him in a very cartoonish way so that is fun too. Yeah, this is pretty much just an all-around enjoyable time. 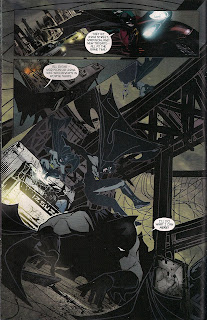 This first issue of a comic sets out to draw you in with its mystery, and it succeeds in doing so while also having some nice writing courtesy of Scott Snyder and great art thanks to Kyle Higgins. It seems we may be in for quite the thrill ride and I am eager to see where the story takes us on this tour of the secret history of Gotham--as the cover states we will be doing.
4 out of 5 stars.
Posted by David Charles Bitterbaum at 10:30 AM