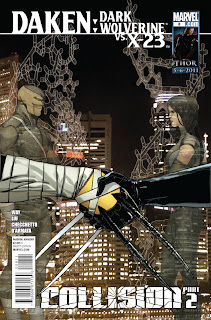 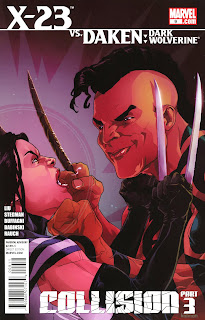 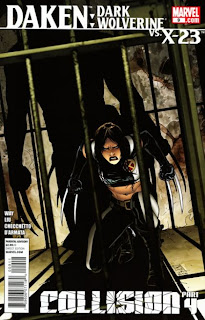 As a cross-over that was designed to get me reading both comics, this succeeded, but as something designed to tell an interesting story, it didn't really achieve what the possibilities held. I mean, we have Wolverine's son and his female clone, and basically they just fight and X-23 gets locked up over the four issues with some sub-plot about the Weapon X program happening too. Daniel Way and Marjorie Liu spend a little time pointing out the interesting differences in Daken and X-23--how one tries to be human and other embraces their sociopathic nature--but mostly we just have some random evil scientist named Malcom Colcord trying to restart Weapon X and our heroes not liking that. Oh, and Gambit is around too. 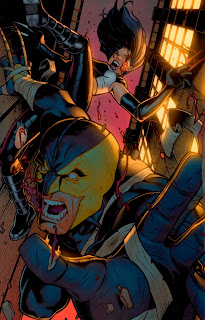 I just found this very underwhelming, with every time I started having fun being countered by some dull over-dramatic monologuing by our heroes about how much better they are than one another. I prefer Daken when he's silently plotting, not chattering away like a gossip at a tea party (although I do enjoy tea parties). There are lots of nice explosions and fights too, maybe too much as that gets a bit monotonous also. Things are just not too impressive. 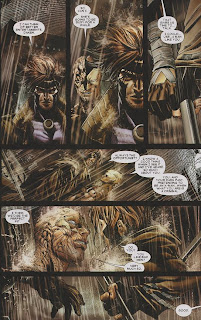 This wraps up Daniel Way and Marjorie Liu's time with Daken (and I think X-23), and instead of going out with a bang its a bit of a whimper. I will go back to not normally reading X-23 because I don't care about a teenage girl who whines about how she was bred to be a killing machine but just wants to be a normal girl, and will pick up issue #10 of Daken today where he goes to Hollywood! Then issue #9.1 the 25th of May! Wait...what? Is it me or is that order really out of whack?
2.5 out of 5 stars.
Posted by David Charles Bitterbaum at 9:00 AM