The Grammys Continue to (Possibly) Be Corrupt and Rigged, Still (Undoubtedly) Pretty Lame 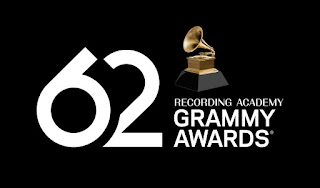 The Weeknd is/was set to perform at the upcoming Grammys. However, he was not nominated for any awards for his latest album. Considering how much buzz and love it has gotten this upset him and resulted in accusations of the Grammys being, "Corrupt." As The Weeknd tells it, due to tense negotiations about how he was performing at the Super Bowl a week after the Grammys and how that impacted certain things, the Grammys purposely shut him out of having a chance to win any awards. Now, one could accuse the Weeknd of just being petty...but, he may have a point. Remember early this year when tons of accusations were being lobbed at the Grammys for being a rigged sham?

Yes, I know 2020 has been a long year, but that did in fact happen way back in January. I am of course not a big fan of the Grammys usually, with their constant snubbing of rap albums winning awards outside of set rap categories often rubbing me the wrong way. I was pleased in 2019 when Kacey Musgraves won album of the year, however. All of that said, I thought the running gag has always been that nobody cares about the Grammys? 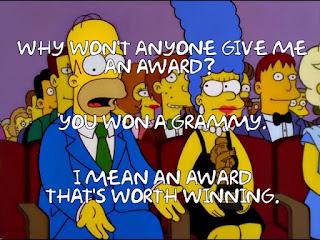 Watch old episodes of shows like, "The Simpsons," and there are multiple jokes about how the Grammys are lame, with my favorite being when Homer remarks in one episode, "Oh, why won't anyone give me an award?" To this, Marge says, "You won a grammy," and Homer responds, "I mean an award that's worth something." Then some 4th-wall-breaking text appears that says, "Mr. Simpson's opinions do not reflect those of the producers, who don't consider the Grammy an award at all," which is just a lovely double-burn. It is silly but reflective of how people often are dismissive of the Grammys. Eminem famously rapped about how stupid they were years ago (but still was willing to accept some, for what that's worth), they try to say how one album is better than another even though we all have different tastes.

I mean, you could argue that makes all award shows kind of pointless due to everyone liking different stuff, but at least with stuff like an Oscar there are some awards that make sense, like ones remarking on great editing or cool special effects (I quit caring about who wins the supposed movie of the year a long time ago). If award shows, in general, are mocked, and the Grammys are the most heckled of all shows, plus they might be the most corrupt of the big awards, who cares about them? Yeah, it can look impressive on your resume to say, "Grammy winner," but if you hate the event so much, why even want an award from it? That's just my two cents on all this, although now I really do hope The Weeknd performs at the show because an anti-Grammys act at the Grammys itself would be pretty wild.